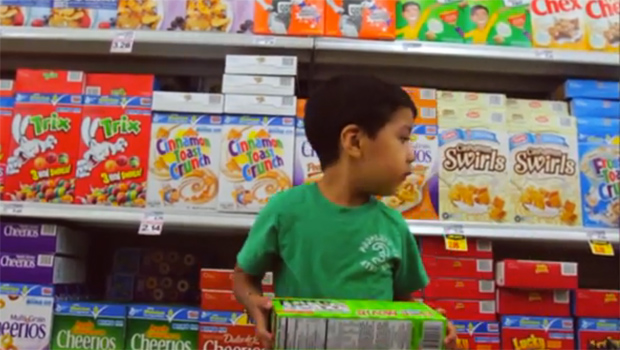 The greatest villain to appear on movie screens this summer isn't a serial killer, terrorist or giant monster. It's sugar.

How evil a villain is it? According to the new documentary "Fed Up" (opening May 9 in select cities), sugar -- currently added to 80 percent of processed foods on U.S. store shelves -- is responsible for America's rising obesity rate, which is occurring despite the tremendous emphasis placed on exercise and portion control for those who are overweight.

Of most concern is the increase in cases of obesity and Type-II diabetes among children, for whom early-onset diabetes was virtually unknown just a few years ago. And if current rates continue, by 2050, one in three Americans will have diabetes.

"One of the most sobering and tragic statistics is that this generation is expected to lead a shorter lifespan than their parents," said Laurie David, executive producer of "Fed Up."
"And if that [isn't] motivation for parents and children to do something about this issue -- to say, 'Hey, this is a really unfair legacy that we're being left with' -- I don't know what is.

"We hope that kids will really be empowered by this film, and want to take back their health," said David, whose last film was the Oscar-winning "An Inconvenient Truth."

Katie Couric, who narrates the documentary (which debuted at the Sundance Film Festival), said that during her years on NBC's "Today" and as anchor of the "CBS Evening News," she and others covered news of childhood obesity in short pieces, "but we were never delving into the root causes of what was going on in terms of the nation's health. It's very hard to find a place on television where you could do a 90-minute look at a critically-important issue. So we thought, why not do a documentary and see where it takes us?"

Directed by Stephanie Soechtig ("Tapped"),"Fed Up" points a finger at the food industry, for increasing added sugars to "low fat" foods marketed under the guise of increased health benefits. Fast-food chains and the makers of processed foods, the filmmakers say, are as big a threat to public health as the tobacco industry had been. Case in point: the food industry lobbied Congress to protect sugar from full disclosure on their products' nutrition labels.

And the food industry had powerful friends: In 2003 the Bush administration threatened to eliminate all U.S. funding to the World Health Organization if WHO published a report advocating that no more than 10 percent of calories in a daily diet should come from sugar; WHO backed down.

And why is there so much sugar added to foods? Partly in response to the marketing of "low fat" food products, to restore the flavor eliminated once fat is taken out. (For example, Hidden Valley's Light Ranch Dressing has half the fat of its regular ranch, but twice the sugar.) Any health benefits that might be achieved from reduced fat are offset by the increases in sugar, which disrupt the body's insulin levels and metabolism, increasing the body's storage of food intake as fat.

At a press conference for the film, Couric said that obesity isn't just a problem for low-income families or the uneducated; very educated and successful people, she said, can still make bad food choices, because they are unaware of what exactly is in their food. "I was buying low-fat everything because I thought it was healthy," she admitted.

Washington has also sweetened the profits of the manufacturers of corn-based sweeteners, such as high-fructose corn syrup, by awarding billions of dollars in subsidies and promoting their expanded use, at the same time a government food pyramid promoted better nutrition. (Use of HFCS doubled between 1970 and 1990.)

And sugary foods -- a major U.S. export - are leading to rising obesity rates across the globe.

"I think we're creating the worst fat in America, and exporting it around the planet," said Dr. Mark Hyman, who is among the experts interviewed in the film.

Also blamed for worsening the health of children: schools, which -- thanks to cuts in government funding for school lunch programs -- have turned to fast-food franchises and soft-drink distributors as partners (and revenue sources) in students' cafeterias.

And it's no surprise that even when offered healthier choices, like salads, sugary foods are popular among kids -- it's addictive. A recent study found that lab rats addicted to cocaine overwhelmingly chose to consume sugar over cocaine.

"Fed Up" also decries government policies for not tackling the problem, and in some ways making it worse. First lady Michelle Obama -- touting her "Let's Move" program to combat childhood obesity -- is shown standing with representatives of food corporations that, in response to the Obama administration's criticisms, announced in May 2010 they would lower the calorie counts of their products by 1.5 trillion.
That pledge ("Fed Up" says) amounts to less than 20 calories a day per person -- a very tiny step that does nothing to reverse the addictive nature of such foods.
"There's a line in the film where Michelle Obama says we don't want to demonize anybody -- we don't want to demonize parents or the food industry," said Dr. Hyman. "Well, the truth is we need to call to task the people who are behind causing some of this. It's not just about obesity or cosmetic appearance; it's about fundamental health problems that are facing us at a scale we've never seen before, and that we're just beginning to see the tip of the iceberg of.

"It was clear that Michelle Obama, in the beginning, came out all guns blazing," Dr. Hyman said. "And then when she talks about the partnership with the food industry, you could see her whole demeanor changed -- she looked depressed, she didn't look up, she had no eye contact, she was not engaged, I think, because she got co-opted under the political pressure to sort of toe the line."

[Earlier this week, the Grocery Manufacturers Association issued a statement blasting "Fed Up," calling the film "short-sighted, confrontational and misleading," and accusing the filmmakers of ignoring the healthier food options that have been made available in recent years.]

Over the course of two years, the makers of "Fed Up" followed four young people struggling to overcome obesity, even with strenuous exercise and portion control. One teenager is seen being advised by his doctor about undergoing bariatric surgery -- a risky procedure that would have been unthinkable for a minor not long ago.

As startling as the film's statistics are, it is these teenagers' honest expression of shame, fear and discouragement that give the film its emotional resonance.

Director Soechtig gave the young people cameras to record video diaries about their obesity. "The footage we got back from these kids was so candid and so personal," she said, "I'm not sure they would have opened up to us in the same way if we had [our] lights and cameras there."

The film challenges its audience to take a 10-day sugar-detox, but that's just part of what needs to be done, says Dr. Hyman. Among his suggestions: a soda tax; eliminating food marketing to kids; making food labels more transparent; and getting rid of all junk food in schools.

Most important is getting back to cooking real food: "It's really taking back our kitchens, which have been hijacked by the food industry," he said. "We've outsourced our cooking to corporations, and that really is the genesis of this whole problem.

"I think the pushback on this is, 'It's elitist to say to people to eat real food, it's too expensive, it's too difficult, it's not convenient, people don't have the capacity to do this.' And I think that's the messaging that the food industry wants us to believe. And it's not true."

"Fed Up," which debuted at the Sundance Film Festival, opens in limited release in the U.S. on May 9, expanding throughout May in other cities; released by Radius/TWC. A Spanish-language version will be available in select cities.

To watch the trailer for "Fed Up," click on the video player below.