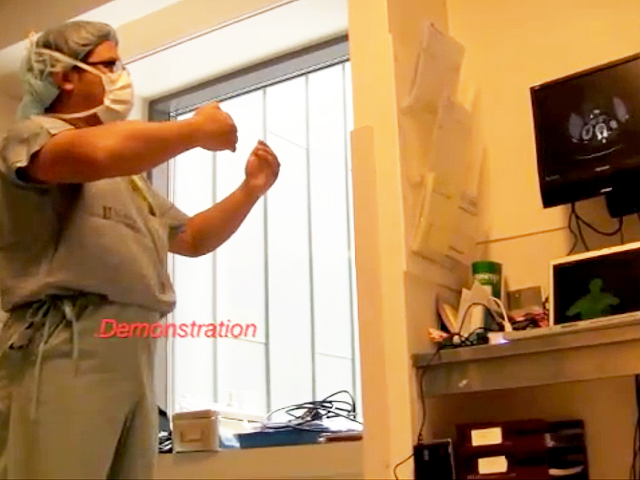 (CBS) Health care professionals may have a new tool in their life-saving arsenal: an Xbox.

Doctors at Sunnybrook Health Sciences Centre in Toronto are using the Xbox Kinect gaming system to solve hygiene problems that typically plague the operating room. And if Microsoft's vision comes true, it can revolutionize the health care industry.

"The problem is that doctors sometimes have to step in and out of the sterile field to gather additional information on the state of a patient in surgery," Denise Amrich, a registered nurse and health care advisor for the U.S. Strategic Perspective Institute wrote on ZDnet. And that means doctors have to rescrub once they're finished reviewing scans, adding delays and risks to inherently risky procedures.

With a program designed by a hospital engineer, Sunnybrook's doctors use the gaming device to review imaging scans right from the operating room. Before, they'd have to work from memory, or leave the room entirely to review the information.

"We're able to bring that computer as if it was the last member of our team, into the working field of the operating room," Dr. Calvin Law, liver cancer surgeon at Sunnybrook said in a hospital-produced video.

And a clean operating room is just the beginning.

CNET reported that Microsoft's chief research and strategy officer, Craig Mundie, told a medical conference in June that Kinect technology can revitalize health care. He envisions patients one day can attend group therapy sessions with other patients and doctors behind the anonymous guise of an avatar that mimics a person's movements and facial expressions.

"The fact that it's anonymous and not really you has value," Mundie said in an interview after the speech. He said an avatar would show if a person is sitting arms crossed, disinterested, furrowing his brows, and doctors can follow-up on those signals of depression, just as they would if a patient was right in front of them.

Dr. Law is already seeing the benefits from using this technology in his hospital

"For all surgeries we do today, really, image guidance is a key to helping the surgeon." He said. "It's like having a GPS for your car now."