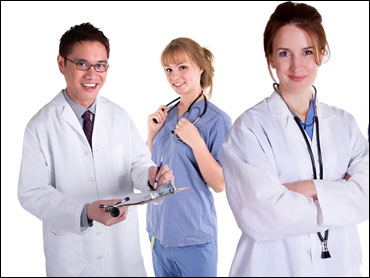 With the passage of health care reform, an estimated thirty two million new patients will try to find primary care doctors. That's not going to be so easy because we already face a shortage of primary care doctors and about 13,000 more will be needed to take care of those newly eligible for insurance.

According to the American Medical Association, there are about 312,000 primary care doctors practicing in the United States. That includes family medicine, general practice (GP), internal medicine, and pediatrics (in addition, there are 43,000 ob-gyn's, who also may serve as primary care doctors). The estimate that another 13,000 will be needed comes from a study done by the Robert Graham Center for Policy Studies in Family Medicine and Primary Care in partnership with the Agency for Healthcare Research and Quality.

Sixty five million Americans already live in areas that don't have enough primary care doctors. And relief is not on the way anytime soon. It takes 5 to 8 years for a first year medical student to be trained as a primary care doctor. And the trend for budding doctors over the past decade has been away from primary care and towards more lucrative specialties.

The new legislation contains some incentives for entering into primary care. Medicare will pay a ten percent bonus to doctors spending most of their time giving primary care to the elderly. Medicaid payments will be increased by about 20 percent in 2013 and 2014 to reach 100 percent of the Medicare rate. This is important because about 16 million new patients will be eligible for Medicaid and many doctors currently don't accept Medicaid because reimbursement is so low. In addition, primary care doctors will be paid extra for coordinating care among a team of doctors.

The new incentives are a good start but more is needed to increase our supply of primary care doctors. For this week's CBS Doc Dot Com, my producer, Heather Tesoriero, and I traveled to a rural community in Indiana and discussed the shortage with an old-fashioned family practitioner named Dr. Jason Marker. When he started practice eight years ago he was $140,000 in debt from medical school loans. He works long hours and sees about 100 patients a week but still owes $125,000. But Dr. Marker isn't in it for the money and he's not looking to heal only the well-healed. The day we visited him, a man walked five miles to his office from a homeless shelter. When I asked Dr. Marker what keeps him going after a rough day, he admitted that sometimes he wondered if it was all worth it. But then he added, "And then you go into the next room and you have a little old lady give you a big hug and you're ready to go again."

Please click here to watch my interview with Dr. Marker.