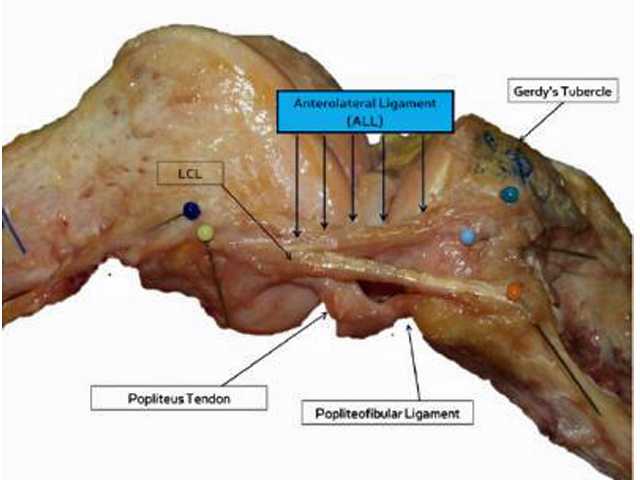 Belgian surgeons' discovery of the purpose of a previously unknown knee ligament may be a game changer for injured athletes.

The anterolateral ligament (ALL) could be the reason behind a common sports injury known as an anterior cruciate ligament (ACL) grade 3 sprain or tear.

There are four main ligaments -- or fibrous tissue that connects bones to each other -- found in the knee joint, which hold the upper and lower leg bones together.

Two surgeons at the University Hospitals Leuven in Belgium were researching why some patients who underwent ACL repairs still had episodes where the knee "gives way" during activity.

They came across an article on the ALL, first theorized by a French surgeon in 1879, but no one ever determined what its structure or function was until now.

The surgeons looked at 41 donated knee joints and found the ALL in all but one of the subjects. They realized that the ALL runs from the outer side of the thigh bone to the shin bone and may play a role in how we twist our knees or switch direction.

They believe that this ligament may be key for people who experience anterior cruciate ligament (ACL) injuries.

ACL injuries usually occur when people change direction quickly, stop suddenly, slow down while running, land from a jump incorrectly or because of direct collision, according to the American Academy of Orthopaedic Surgeons. Symptoms include pain with swelling, loss of full range of motion, pain while walking and tenderness along the joint line.

In grade 1 sprains of the ligament, the ACL becomes stretched, and in grade 2 sprains, it becomes loosened. However, in ACL grade 3 sprains or ACL tears, the ligament completely severs and the knee becomes unstable.

Torn ACLs need surgery and physical therapy in order to repair the ligament. Washington Redskins quarterback Robert Griffin III underwent the procedure in January to repair both his ACL and his lateral collateral ligament (LCL). People who do not need a full range of motion from their knees like the elderly and those who are not physically active may be able to rehabilitate their knees through just therapy and using braces.

Then where does the ALL come in? The authors noted that patients who have ACL surgery sometimes still have "pivot shift" problems where the knee does not stay in place during use. This could be because the surgeons aren't addressing the torn ALL, which may be injured at the same time as the ACL. This makes the knee more vulnerable to injury when it rotates. ALL injuries may also be responsible for small fractures that usually are blamed on ACL injuries.

"We know today that a number of patients continue to experience discomfort and instability after knee replacement even despite successful surgery, which may be related to (previously unrealized) damage of the anterolateral ligament during surgical exposure for prosthetic insertion," author Dr. Johan Bellemans, professor of orthopaedic surgery at the Catholic University Leuven in Belgium, told the National Post. "We are currently looking into this, hoping to help our patients by improving the way we operate on them while preserving the structures that are vital for maintaining their knee joint."

Other experts agreed that this was a landmark finding.

"If you look back through history there has been a veiled understanding that something is going on on that side of the knee but this work finally gives us a better understanding," Dr. Joel Melton, a consultant knee surgeon at Addenbrooke's Hospital in Cambridge, England, told the BBC. "I think this is very exciting -- there is no doubt they have hit upon a very important anatomical structure."

The article was published in the October issue of the Journal of Anatomy.