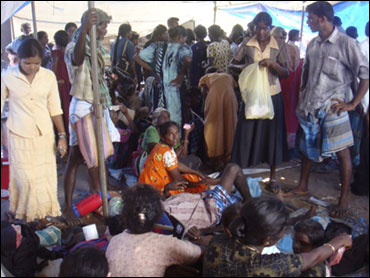 A Sri Lankan health official said the civilian death toll from a massive artillery barrage overnight in the island's northern war zone has risen to 378, in what he described as the bloodiest day of the government's offensive against the Tamil Tiger rebels.

Dr. V. Shanmugarajah, a physician working in the war zone, said the bodies of 378 people had been brought to the makeshift hospital that he runs.

He says 1,122 more people have been wounded.

Dr. Shanmugarajah described seeing shells fly through the air, with some falling close to the hospital, sending many diving into bunkers for safety.

The rebel-linked TamilNet Web site said 2,000 civilians were feared killed and blamed the attack on Sri Lankan forces - a charge the military denied.

Human Rights Watch leveled a similar charge on Saturday, accusing the military of repeatedly hitting hospitals in the war zone with artillery and aerial attacks that killed scores of people, and said commanders involved in the attacks "may be prosecuted for war crimes."

But military spokesman Brig. Udaya Nanayakkara said government forces were only using small arms in their effort to wipe out the Tamil Tigers.

"There is no shelling taking place," he said.

The hospital struggled to cope with the hundreds of wounded civilians brought to the facility, Dr. Shanmugarajah said.

The government had sent medical supplies into the war zone in the past days, but a shortage of physicians, nurses and aides has made treatment difficult, he said.

"We are doing the first aid and some surgeries as quickly as we can. We are doing what is possible. The situation is overwhelming; nothing is within our control," he said.

Shanmugarajah said he sought the help of volunteers to dig graves for the bodies brought to the hospital. 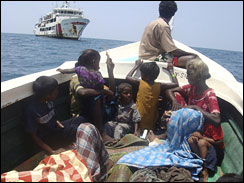 The government vowed two weeks ago to cease firing heavy weapons into the tiny coastal strip that remains under rebel control in an effort to avoid civilian casualties. However, medical officials in the area have reported that air strikes and artillery attacks have continued unabated, despite the presence of an estimated 50,000 ethnic Tamil civilians in the conflict zone.

Reports of the fighting are difficult to verify because the government bars journalists and aid workers from the war zone.

U.N. figures compiled last month showed that nearly 6,500 civilians had been killed early this year as the government renewed its efforts to end its 25-year civil war with the rebels.

In recent months, government forces pushed the rebels out of the shadow state they controlled across a wide swath of the north and cornered them in a tiny spit of land along the northeast coast in an effort to end the 25-year-old civil war.

The government has brushed off international calls for a humanitarian cease-fire, saying the beleaguered rebels would use any pause in fighting to regroup.

It has accused the rebels of using civilians in the north as human shields, and Nanayakkara said the insurgents shot families who tried to escape the war zone Saturday, killing nine people.

The rebels have been fighting since 1983 for a separate state for minority Tamils, who have suffered decades of marginalization at the hands of governments controlled by the Sinhalese majority.

Meanwhile, pressure on reporters critical of the government's war effort has intensified.

Three journalists from London-based Channel 4 television were deported Sunday, a day after they were arrested for alleged false reporting on the island's civil war.

Lakshman Hulugalle, the head of the government security information center, said the journalists admitted they had "done something wrong" and would not be allowed to come back to Sri Lanka.

Nick Paton-Walsh, the channel's Asian correspondent, spoke to The Associated Press from Singapore and denied giving a statement to police or admitting wrongdoing. "This is complete rubbish," he said.

A spokeswoman for Britain's Foreign Office said the government made a "deeply disappointing decision." She spoke on condition of anonymity in line with government policy.

Walsh said he, producer Bessie Du and cameraman Matt Jasper were detained by police in the eastern town of Trincomalee and asked to give a statement, but he refused.

Later a man in plain clothes spoke to him and took down notes saying those were for his future reference, he said.

Walsh said Saturday that he believed the arrests were connected to his recent report on the conditions of the war refugees and alleged sexual abuse in camps for those who fled the northern war zone.

ITN News, which produces Channel 4, said their original report, broadcast on May 5, contained the first independently filmed video from one of the displacement camps.

"The report contained claims that dead bodies were left where they fell, shortages of food and water, and sexual abuse," it said

The government has denied the Channel 4 report.

According to Amnesty International, at least 14 local journalists and Sri Lankans working for media organizations have been killed since the beginning of 2006. Others have been detained, tortured or have disappeared. Amnesty says 20 more have fled the country because of death threats.