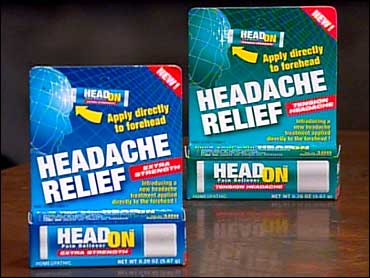 Odds are you've seen the TV commercial that repeats the phrase, " 'Head On,' apply directly to the forehead" over and over.

It touts the benefits of an over-the-counter product.

The ads used to say rubbing it on your forehead would relieve headaches, but then the Better Business Bureau announced that, "The company failed to provide any reliable clinical testing to support its claims."

The commercials no longer claim Head On works, but they've become something of a pop phenomenon.

On The Early Show Wednesday, Dr. Dara Jamieson, director of the Headache Center of New York-Presbyterian/Weill Cornell Medical Center, told Russ Mitchell, "The only thing distinctive about this product is its commercial. There's nothing in the ingredients that would treat headaches. The concentration of the ingredients is so minute that you wouldn't think it would treat headaches."

Still, Mitchell pointed out, some people claim Head On works for them.

"If you believe a headache product works, you may get some benefit from it," Jamieson explained. "There's a large placebo response to headache treatment. That's what you may see with this product. People may say they feel a sensation when they rub it on their forehead, but that would be a sensation that wouldn't have any mechanismistic effect on the headache itself."

But Jamieson says she wouldn't go so far as to call Head On dangerous: "There's no danger except the economic danger of taking money that could be used for, say, the co-pay to see your doctor to talk about your headaches, and figure out why you have headaches and what would be the best treatment for you.

"I would recommend, first, that you talk with your doctor to figure out why you have headaches. Most are not troubling. They're worrisome to the patient, but don't indicate an underlying, significant disease, but some could, and you need to figure it out.

"Once it turns out you have tension-type headaches or migraine headaches, then there are specific medications that have been scientifically shown to work for treatment, and those can be used. But to use a product like this is not going to give you any relief.

"The issues with a product like this are that, sometimes, headaches come, last for a few hours, and go away. And if you rub this on your head for a few hours, your headache may go away as part of its natural history. But there's no scientific basis for using this product."

She added another slam, saying, "Some people say they get tingling, or a sense of coldness when you put it over your forehead. You'd be better off wrapping a towel around a bag of frozen vegetables, putting that on your forehead and then sensing tingling."