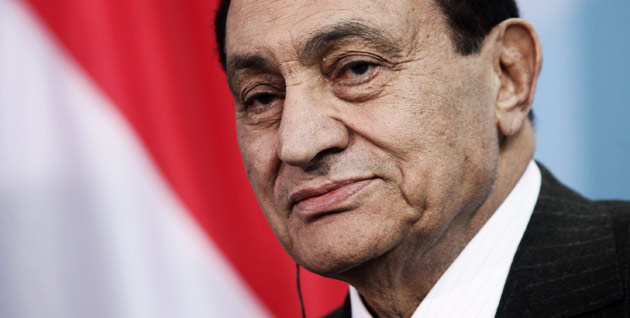 CAIRO - The head of the medical team supervising Hosni Mubarak's health denies the ex-president suffered a stroke or is in a coma.

Dr. Assem Azzam said Sunday that the 83-year old Mubarak had suffered a bout of low blood pressure but was now stable.

Mubarak's lawyer Farid el-Deeb said earlier that the ousted Egyptian president had suffered a stroke and was in a coma. However, the doctor said Mubarak only suffered low blood pressure and felt dizzy. Azzam said he was in stable condition.

Mubarak has been in a hospital in the Red Sea resort of Sharm el-Sheikh since April under arrest on charges he ordered the killings of protesters during Egypt's uprising. He is said to be suffering from heart trouble.

Earlier today el-Deeb told the Associated Press, "The president had a sudden stroke. Doctors are trying to bring him to consciousness. He is in a total coma."

Mubarak is set to face trial in August on charges he ordered the killings of protesters during the 18-day uprising that ousted him on Feb. 11. A conviction could carry the death penalty and activists suspect his lawyer may be using health problems as a ruse to sway public opinion and perhaps even win amnesty.

Protesters have camped for more than a week in Cairo's Tahrir Square, demanding a public trial for Mubarak and other regime officials accused of complicity in killing protesters.

El-Deeb has made other claims recently about Mubarak's deteriorating health that were also denied by senior medical officials.

Mubarak was treated last year for cancer in his gallbladder and pancreas, and el-Deeb said last month that he may be suffering a recurrence that spread to his stomach.

However, two senior Egyptian medical officials - one of them the head of Mubarak's team of doctors - said at the time he did not have the disease.

Ever since Mubarak traveled to Germany early last year for medical treatment, it has been widely rumored that he has cancer. But his health was a closely guarded secret, and the cancer was never spoken of publicly until recently.

El-Deeb claimed last month that Mubarak underwent "critical surgery" in Heidelberg, Germany, last year to remove his gallbladder and part of his pancreas, which were cancerous.

At the time, he called Mubarak's condition "horrible" and said the former leader "doesn't eat and he loses consciousness quite often."

Mubarak has lived in Sharm since his ouster.

Mubarak's purported health issues have complicated efforts to bring him to trial. He was hospitalized on the day prosecutors trying to build a case against him sought to question the former leader for the first time.

Prosecutors have questioned him in the hospital, but an order to transfer him to a Cairo prison during the investigation was overturned on the grounds that the prison health facilities were inadequate to treat him. A report by a government-appointed panel of physicians determined in May that Mubarak is too ill to be held in prison while awaiting trial.

That report said Mubarak was suffering from heart troubles and confirmed he had "tumors" in his pancreas removed. But it did not specify whether the tumors were malignant. It also said that Mubarak can't leave his bed without assistance.

Reports about Mubarak's health are a highly politicized issue because his trial is unprecedented in the history of modern Egypt.

Youth groups have warned that granting Mubarak amnesty would only spark a new revolution.

In May, an Egyptian paper ran an unconfirmed report that the Egyptian military rulers were considering doing just that in return for an apology to the nation for any wrongdoing.

The report sparked a public outcry and a mass protest in Cairo's Tahrir Square - the epicenter of the Egyptian revolution. That forced the country's military rulers to issue a denial and distance themselves from Mubarak's trial.

Mubarak has been charged with conspiring with the former security chief and other senior police officers - already on trial in a criminal court - "to commit premeditated murder, along with attempted murder of those who participated in the peaceful protests around Egypt."

The charges say Mubarak and the other officials were involved in "inciting some policemen and officers to shoot the victims, running some of them over to kill them, and terrorizing others."

At least 846 protesters were killed during the revolt.

Mubarak's sons, Alaa and Gamal, have been held in Cairo's Tora prison since mid-April while they are investigated on charges ranging from corruption and squandering public funds to ordering the violent suppression of anti-government demonstrations.

For years, Mubarak's health was a tightly guarded secret, and each flare-up threw the country into uncertainty because there was no clear successor.

Following Mubarak's surgery in Germany last year, Egypt's government said that doctors removed benign tumors from his gallbladder. Egyptian state TV also broadcast footage of Mubarak speaking to his doctors in an attempt to assure Egyptians that his condition was stable.