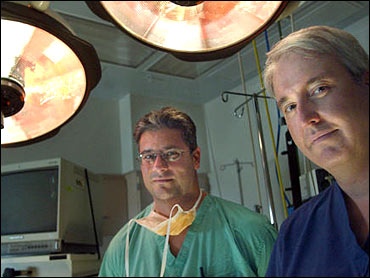 The last straw for ear, nose and throat specialist Dr. Tom Boran and his partner came when their annual malpractice insurance premiums rose from $54,000 to $92,000 this year.

Neither has lost a lawsuit, and while treating more patients helped them pay the cost, that left them mentally and physically exhausted at day's end, Boran said.

"You get to the point where a lot of physicians say, 'Life has to be better than this,"' said Boran, who practices in Pottsville, Pa.

So like many other doctors, they have looked beyond commercial malpractice underwriters and discovered self-insuring policies offered by newly forming physician-run mutual companies or so-called risk retention groups. With some doctors shut out of the malpractice marketplace by rising premiums or a dearth of policy writers, the groups are increasingly appealing.

In many cases, the mutuals simply offer an option to doctors who were stuck with an underwriter of last resort after their previous commercial insurers pulled their policies or went under. Although mutuals emphasize profits less than commercial insurers that answer to shareholders, they don't always deliver lower premiums.

While Boran and his partner haven't made a decision yet, many other doctors have. Risk retention groups for physicians have more than doubled in the past 18 months, and with older physician-owned mutual insurance companies stretched too thin to write new policies, new ones are popping up.

Should a mutual insurance company go under, its outstanding claims are typically covered at least in part by an industry-financed guaranty fund. Risk retention groups are another story: Doctors largely are left holding the bag for any claims that arise from the period in which the group covered them.

"Across the nation, we see entrepreneurs coming into the marketplace, and that's fine as long as they're well-capitalized," said Lawrence Smarr, president of the Physician Insurers Association of America.

Smarr said 36 domestic physician-run insurers, most of which are mutuals, are members of his organization, which began 25 years ago as the groups began to form during a previous malpractice crunch.

Risk retention groups were authorized by federal law in 1986 to underwrite malpractice liability. Today, there are 17 existing physicians' risk retention groups, 10 of which formed since January 2002, according to the Risk Retention Reporter, an industry publication.

Policyholders make contributions to finance the group's initial capitalization and generally are responsible for the operation's expenses.

Mutual insurance companies are largely run the same way, but in general have stricter regulatory requirements, including the amount of initial capitalization.

Examples of startups in recent months include: a risk retention group for physicians in central Pennsylvania and another for emergency room physicians in New Jersey; two physician-run mutual insurance companies in Missouri and another in Kentucky.

All four states are on the list of 18 that the American Medical Association identifies as those with a malpractice liability crisis.

Lloyd Downard, the administrator for Physicians Professional Indemnity Association, begun in recent weeks in Poplar Bluff, Mo., said the aim of the mutual company is to keep insurance payments low for physicians, not to generate profits.

Smarr and others say the new groups should thrive, at least until the first claims come due. That's when their financial wherewithal will be tested.

"The question is, are they going to be able to set premiums that are accurately going to reflect what the claims are four or five or six years down the road?" asked Michelle Mello, a lawyer and assistant professor at Harvard University's School of Public Health.

Typically, it takes about five or so years for a malpractice claim to be processed. While it is pending, malpractice insurers are able to invest the premiums and help fund the claims with stock market gains.

Dr. George McGee, a general surgeon in Hattiesburg, Miss., was one of more than 3,000 doctors scrambling for coverage after his risk retention group, the Tennessee-based Doctors Insurance Reciprocal, went into bankruptcy in February.

"This is a tragedy, a real tragedy," said McGee, who joined Doctors Insurance for its lower premiums, but remains uninsured for claims that arise from the six years he was covered by the group.

For now, McGee counts himself as one of the lucky ones: He is covered by a policy through a hospital chain that he and his partners in private practice joined as employees.

The ones that remain physician-run pride themselves on "patient safety" measures that they say reduce risk.

Boran and his partner, Dr. Joseph Puzzi, are hopeful that they'll come up with a new policy this year before it comes time to renew their commercial policy. They are watching to see whether the ear, nose, and throat medical society to which they belong will form its own mutual insurer.

And in the wake of the Doctors Insurance bankruptcy, they are weighing the risks of a risk retention group that has already approved them for a policy at about half of what they are paying for insurance currently.

"Either you have to take the chance of self-insuring with an RRG or a mutual, or you have to move," said Puzzi. "It's that simple. And we love it here."

By Marc Levy and Robert Sandler