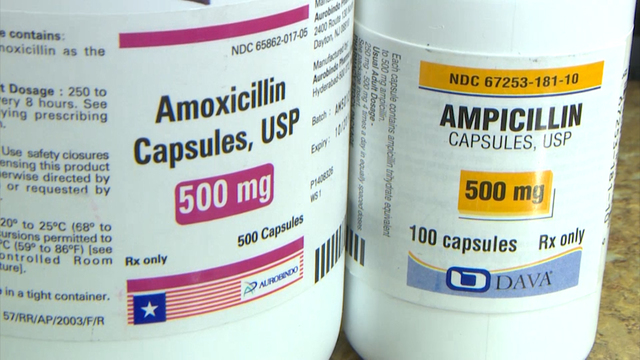 A new blood test is in the works that could help doctors tell if a patient with a respiratory illness is suffering from a virus or a bacterial infection, or even a non-infectious condition with similar symptoms. The test could help cut back on the serious problem of antibiotic overuse, say the scientists who developed it.

Instead of trying to test patients for the specific infection causing their illness -- strep or the flu, for example -- researchers at Duke Health took a different approach. They came up with a way to discern what was causing an illness by detecting gene expression changes in a patient. In other words, they looked to a person's response to the illness instead of the illness itself, and found that bacteria and viruses each elicit unique immune responses in humans.

Their new study, published in Science Translational Medicine, showed the blood test holds promise. The scientists analyzed blood samples from 273 emergency room patients with respiratory problems who had visited emergency departments at five hospitals. They compared the results to 44 healthy people and found that the "gene signature" blood test was 87 percent accurate at ID'ing patients with flu viruses, rhinovirus, several types of strep bacteria and other common infections. The test also indicated when no infection was present.

By distinguishing between viral and bacterial infections, doctors hope to cut down on the overuse of antibiotics, which only work against bacteria but are often mistakenly prescribed for people with viral illnesses. That overuse has contributed to the rise of antibiotic-resistant superbugs, which kill an estimated 23,000 people in the U.S. each year.

Respiratory infection is one of the most common reasons people visit the doctor, said the study's lead author, Dr. Ephraim Tsalik, an assistant professor of medicine at Duke and an emergency medicine provider at the Durham VA Medical Center. About three-quarters of patients end up taking antibiotics even though the majority are actually nursing viral infections.

"The more antibiotics someone takes, especially when they don't need them, exposes them to other effects on their overall health and also puts them at higher risk of developing resistance to infections later on," Tsalik told CBS News.

One drawback to the newly developed test is that currently it takes a long time to give results, said senior author Dr. Geoffrey Ginsburg, director of Duke's Center for Applied Genomics & Precision Medicine.

"It's a turnaround time of 10 to 12 hours -- not really ideal for clinical use because you want a prescription right away. We're working on getting a turnaround time for of an hour. That's what a lot of our work is centered around now," Ginsburg told CBS News.

When will the test be available in doctor's offices? "The five-year horizon seems pretty reasonable to me. It's actually quite realistic," Ginsburg said.

A test like this could even eventually be developed into a home-based test kit, like a pregnancy test, so patients know whether to head to the doctor for a prescription, or stay home and nurse their cold with chicken soup, said Ginsburg.

He said the test could also help detect fungal and other infections, and lead to more precise treatments of viruses, including the common cold.