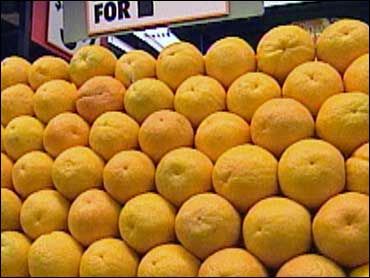 In the wake of banned seafood from China and years of concern over mad cow-tainted beef from Europe, many consumers are worried about where their food is coming from.

The Early Show consumer correspondent Susan Koeppen went to a supermarket with a food safety expert and found that figuring out where many foods come from is virtually impossible and some food labels are even misleading.

"The government guidelines right now don't require that all products be labeled where they come from," Consumer Reports scientist Dr. Urvashi Rangan said.

Right now, only seafood is required to list its country of origin and about 80 percent of the seafood sold here is imported.

"If you ask your fish monger where that fish is from, they should be able to tell you," Rangan said.

But when it comes to other foods like fruits and vegetables, consumers are often left wondering.

Now, after years of delay, the government says all foods will be required to come with country of origin labels by the end of September. But how this new law would be implemented has yet to be determined and that doesn't sit well with many consumers, who have growing concerns about tainted food from China, and for years have worried about mad cow disease because of tainted beef from Europe. Moreover, only 1 percent of imported food sold in the U.S. is inspected.

"We don't think that's enough," Rangan said. "We really feel like the FDA needs to step up inspections."

According to a Consumer Reports poll, 92 percent of Americans agree that imported foods should be labeled by their country of origin.

"We simply think knowing where your food comes from is like an ingredient or nutrition label and it's important information for consumers to make informed decisions," Rangan said.

When Koeppen walked through a typical American grocery store, some products were clearly marked, like peaches. The grapes have the American flag and say California grown. But cheese, which carries the French flag, isn't made in France — it is really made in Wisconsin. And a jar of honey says it is made in San Francisco in bold print, but it's made in Spain.

"This is certainly one example where consumers can get duped into thinking one thing when it's really another," Rangan said.

If you are looking for home-grown foods, chicken, eggs, milk, potatoes and oranges are good bets. Foods like bananas and garlic are often imports. And about 16 percent of our beef is imported as well. but until labels are standard, most consumers are in the dark and left guessing as they fill their carts.

Helping Those In Need