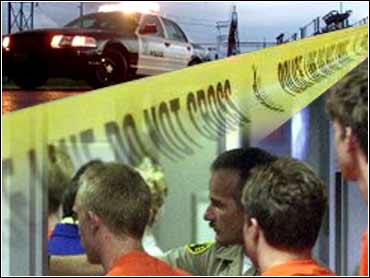 Five New York City teens are charged with beating a Chinese food deliveryman to death to avoid paying him -- and not even bothering to steal the hundreds of dollars he had as they ran off to feast.

A 16-year-old girl and boyfriend face charges in Los Angeles County they stabbed four of her family members to death and tried to kill her mother.

In nearby Glendale, two teens are charged with torturing and murdering a 13- and a 14-year-old boy on a school playground.

And in neighboring San Bernadino County, police find that a 15-year-old girl beat an elderly woman to death on a whim -- as her 13-year-old friend watched. Police learned of the crime when the accused told them.

All of these crimes have one thing in common: all happened this summer seemingly without provocation in violence so callous and senseless that they puzzled even the most hardened investigators.

A New York district attorney says the weekend murder "leaves us all shaking our heads as to why these kids would do what they are accused of doing."

And L.A.'s District Attorney calls the series of crimes that took place in July "beyond comprehension."

There is concern that a new type of youth crime is emerging -- one as unique to our time as the drive-by shootings and rumbles were in different eras.

These are senseless, brutal crimes best symbolized by the spate of school shootings that culminated in the 1999 Littleton, Colo. massacre.

While the response of some people trying to make sense of it all has been increased calls for gun control, easy access to weapons isn't a factor in many of these crimes.

The New York and Los Angeles cases did not involve a gun. Nor did the 1997 Central Park disembowelment of 44-year-old Michael Morrow by two baby-faced teenagers, or the 1997 knife-torture murder of New York City teacher Jonathan Levin, son of Time Warner CEO Levin, by a student.

A rise in the crime doesn't explain the violence either. Juvenile homicide, like crime overall, has been dropping dramatically since the all-time highs of the early 1990s. However, the youth homicide rate remains nearly double what it was in 1980, and five times the rate of the early 1960s.

James Alan Fox, a professor of criminal justice at Northeastern University, says "We have had for many years instances of kids who kill for very trivial reasons," he says. "There is a persistent level of senseless teenage violence that shocks our sensibilities."

On the other hand, Fox notes the form crimes take changes.

"Ten years ago a kid would never have even thought of taking a gun to school. Never would have dreamed about the possibility," he says. "This kind of behavior is unfortunately has become somewht of a negative tradition in America…. Part of the culture builds on itself."

Fox says people trying to make sense of these crimes by looking for a rise in depravity among young people are on the wrong track.