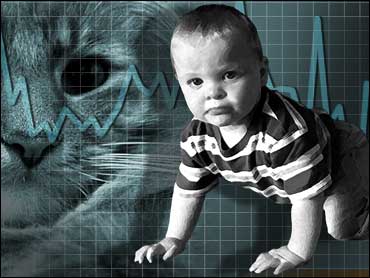 Newborns who share a home with a pet cat may be more likely to develop eczema as infants than other babies.

A new study shows babies exposed to cats shortly after birth had higher rates of the allergic skin condition at age 1 than babies who lived in homes without cats.

Although the results showed having two or more dogs at home was associated with slightly lower rates of eczema, this protective effect was not significant.

Researchers say the results contradict previous studies that have suggested having cats or dogs at home may protect against allergic diseases like eczema.

"The findings do seem to add more questions about pets and asthma and allergies," says researcher Esmeralda Morales, M.D., a pediatric pulmonary fellow at the University of Arizona, in a news release. "Since there are a lot of contradictory data out there already, clearly it's a topic that needs further research."

Eczema is a common skin condition that causes skin to become inflamed and itchy. Small blisters that ooze fluid and crust over can also occur.

The study, presented this week at the American Thoracic Society's International Conference in San Diego, involved 486 children who were followed since birth. Researchers asked the children's parents how many cats and dogs they had in the house at the time the child was born and then followed up a year later to determine how many of the children had been diagnosed with eczema.

The study showed that of the 134 children who lived with cats, 28 percent had eczema by their first birthday compared with 18% of the 286 children without cats.

Researchers found the increased eczema risk associated with having a cat at home was especially pronounced among children whose mothers did not have asthma. Prior studies have shown that people with eczema are also more likely to have other allergic diseases like hay fever and asthma.

"Other studies have found that having cats or dogs at home seems to be protective against allergic diseases, so we expected to have similar findings," says Morales. "Pets are a source of a compound called endotoxin, and if a child is exposed to endotoxin early in life, the immune system may be skewed away from developing an allergic profile."

Researchers say that means that even though the children with cats in the study developed eczema at an early age, they may end up having a reduced risk of asthma or other allergic diseases later in life.