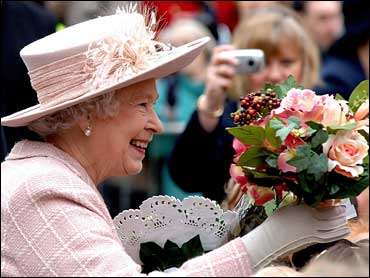 Thousands of people are expected to jam Richmond's Capitol Square on Thursday for a glimpse of Queen Elizabeth II and her husband, Prince Philip, when the British royals arrive to mark the 400th anniversary of the Jamestown colony, the first permanent English colony in the United States.

The queen and Prince Philip left England on a chartered British Airways plane, and were expected to land at the Richmond Airport at 3 p.m. EDT. The queen also plans to attend the Kentucky Derby and meet President George W. Bush.

She also plans to have a private audience with survivors of last month's massacre at Virginia Tech university and families of some of the 32 who were slain.

On Thursday evening, the queen was expected to take a horse-drawn carriage through Colonial Williamsburg, Virginia's capital until then-Gov. Thomas Jefferson and the legislature fled to Richmond to elude British capture in the Revolutionary War.

On Friday, she is to tour the site where, 400 years ago, Jamestown became the first permanent English settlement in America. The royal couple are due at the Kentucky Derby on Saturday and will visit President George W. Bush in Washington next week.

She also will visit NASA's Goddard Space Flight Center and the National World War II Memorial in Washington before heading home on Tuesday.

British, U.S. and state security teams began securing Capitol Square and streets around it Wednesday while work crews erected video screens the size of stadium scoreboards so the masses outside will be able to see the queen's speech to a joint session of the Senate and House of Delegates.

For much of Richmond's downtown work force, the queen's visit means a day off, and many will spend it on the Capitol's sloping South Lawn before her mid-afternoon arrival listening to musical acts as diverse as jazz ensembles, a marching band and Grammy-winning bluegrass legend Ralph Stanley.

Across downtown, the River City Diner and its hard-partying younger clientele planned to mark the day with the alcohol-rich "Royal Cape Shooter." A large sign beckoned Her Majesty with the invitation, "QUEEN EATS FOR FREE."

State officials, however, took pains to steer the royal entourage clear of the juncture of Main and 15th streets, a few blocks from the Capitol. There, two stories high and covering the outside brick wall of a strip club, is a fading black-and-white painting of her late daughter-in-law, Princess Diana.