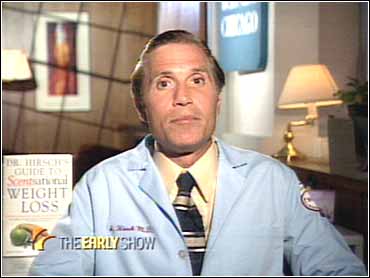 Is there a link between junk food and personality?

A research outfit called the Smell & Taste Foundation recently concluded a study that seems more comical than serious. The Foundation, which studies disorders, disease, emotions, and behavior related to smell and taste, is now out with a study claiming that the type of junk food you eat may be an indicator of your personality type.

Dr. Alan Hirsch says he conducted the study over an eight-year-long period.

In an interview with CBS News Early Show Anchor Bryant Gumbel, Hirsh tells what inspired the study, sponsored by the Snack Food Association.

"Here at the Smell & Taste Foundation, we take care of patients who have lost their sense of spell and taste," said Hirsch. "What we found after people lose their sense of smell and taste, they develop a variety of disorders and the idea came, there might be a link between food preferences and personality. Sort of like a Rorschach test. You look at an ink blot and depending on how you interpret it, you get insight."

They did a series of psychological tests on 800 people and were able to categorize their personality types and looked at their "hedonics." Hedonics, you ask? That's a branch of psychology dealing with pleasant and unpleasant feelings.

Hirsch assessed people's snack food preferences and said he was able to determine their personality type.

Hirsch says people who like potato chips the most are aggressive, go-getters, who won't take no for an answer.

A tortilla chip lover, says Hirsch, is a perfectionist.

"They're not satisfied with getting an "A." It must be an "A plus."

What about people who like tortilla chips and potato chips too?

"People tend to be very food-specific in that way," Hirsch says.

If pretzels are your thing, then Hirsch says you are lively and energetic.

"We think of them as more of the plain and boring. They're not. It's exactly the opposite."

People who like cheese curls "could be described by one word, integrity. They maintain the high moral ground," said Hirsch.

A beef jerky lover is "the life of the party and tend to be very outgoing and gregarious," said Hirsch.

Hirsch he didn't include snacks like raw vegetables, fruit or candy as part of the snack food study.

He said people develop their food preferences between the ages of 1 and 7.