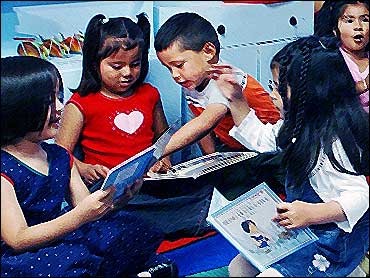 New research suggests that children who attend Montessori schools may have an edge over other children in terms of both academic and social development.
But an early education researcher who spoke to WebMD says the study was far too small to be conclusive.

The 5-year-old Montessori students were found to have better reading and math skills than their peers who attended traditional schools and they scored higher on tests measuring social development, researchers reported.

The study is published in the Sept. 29 issue of the journal Science.
Lillard is a professor of psychology at the University of Virginia at Charlottesville, who acknowledges being a proponent of the teaching method. She published the book Montessori: The Science Behind the Genius last year.

No Tests, No Grades

This method stresses small group instruction that allows children to choose their own developmentally appropriate activities and learn at their own pace. There is no testing and no grading.

Montessori is primarily used in preschool and early education settings, but there are also Montessori middle schools and high schools.

Concerns about the program tend to focus on the lack of testing and grading of school-aged children, Lillard says.

"Parents worry that their children won't be able to compete if they aren't exposed early to competitiveness in school," she says.

"The thinking is that parents who want their kids to go to Montessori schools might be more motivated and more organized and orderly at home," she says. "And we know that organization and order at home leads to better child outcomes."

The researchers chose the subjects in their study from a pool of children who had entered the lottery to go to the Milwaukee Montessori schools.
All the children in the study came from families with similar income levels, averaging $20,000 to $50,000 per year.

Debra Ackerman, Ph.D., of the privately funded National Institute for Early Education Research (NIEER), tells WebMD that no single teaching method or curriculum, including Montessori, has been proven to be the best approach for teaching young children.

The latest study, she says, was not only too small to allow generalization to all public school settings, but the two-page report in Science left out much of the methodology needed to assess the accuracy of the results.

"It is impossible to judge the merit of this study, based on what was published," she says.

There are many widely differing approaches to early education, Ackerman says, and the large- scale studies needed to better understand which methods work best are just starting to be done.

It is clear, she adds, that young children learn best when they are taught in smaller classrooms with student-teacher ratios of no more than one to 10. And paying enough to recruit high-quality teachers with college degrees in early education also makes a difference.

"We know that high-quality programs can't be done on the cheap," she says.