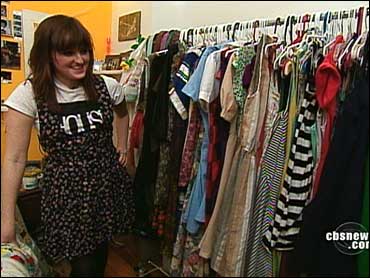 Grandma's pastime has gotten quite a makeover.

Fans of this particular knitting club include everyone from punk rockers to a 12-year-old girl named Alice, wearing the skirt she made, reports CBS News correspondent Kelly Wallace.

"So go out there and have some fun - DIY-ing," said Alice on an Internet video.

D-I-What? DIY - that's do it yourself - the theme of an Internet show hosted and produced by two DIY-ers, Corinne Leigh and Rob Czar.

"So do it yourself is the new black?" Wallace asked.

On the hip Threadbanger.com, Leigh and Czar dish out ways to make trendy fashion on the cheap, from the basics, like how to sew on a button, to building your own bikini.

How exactly do you make a bikini out of old T-shirts?

"I guess you'll have to watch to find out," Leigh said.

Their show has taken off as the economy has tanked. Viewership doubled from 500,000 last year to 1 million monthly viewers now.

"People are looking for any way to save money," Leigh said.

Loyal viewers include people like cash-strapped 23-year-old Kelly Kerwin. She can't afford any new clothes, so she reinvents what she already has.

"I decided to hem it to hide the stain," said Kerwin while sewing.

"People that make their own stuff, they're just so much cooler," Leigh said.

Stitch and save is definitely the new hands-on chic.