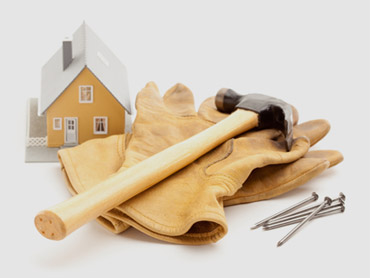 As more homeowners are feeling economic pressure, many are trying to save money by doing home improvement jobs themselves. But often, the results can be disastrous.

"Early Show" consumer correspondent Susan Koeppen noted that the home improvement shows and magazines may make some of those projects around your house look easy. However, she said it could end up costing you a lot more than just money.

Koeppen reported that Matt Taylor of Danville, Ill., was using a nail gun to put up a ceiling in his basement and ended up in the emergency room when a nail went through his hand.

Taylor said, "They had to pull it out with pliers."

"I saw a guy with a bandage on his thumb, he smashed his thumb with a hammer," he said. "I saw someone put his foot through a roof."

In Charlotte, N.C., Richard Beddingfield was on a ladder in his yard sawing a tree branch when he fell. He was in a coma for three weeks.

As for Benningfield's tree branch, a tree specialist, Koeppen said, ended up doing the work.

Patrick George, of Heartwood Tree Service, told Koeppen, "That's probably the most common mishap that we see, when someone uses a ladder to try and cut off a limb."

Emergency rooms across the country are seeing an array of do-it-yourself injuries.

Angie Hicks, the founder of Angie's List.com, which helps homeowners find reliable contractors, said a recent survey of her members found 83 percent take on do-it-yourself projects to save money. However, according to Hicks, one in five of them has had to call in a professional to finish the job.

Hicks said, "If you're thinking about doing a project yourself first assess your skill. Be honest. Then, do you have the right equipment and do you know how to use it? If you don't know how, it can be quite dangerous."

Benningfield said if he had it to do over again, he would have called the tree experts first.

"Hindsight is better than foresight," he said. "I would now, I would call (the tree specialist)."

Koeppen added that falling off a ladder is the most common do-it-yourself injury, with more than 136,000 Americans receiving emergency treatment a year. This number is up by 50 percent, she said, over the last 16 years.

As for the cost of the projects, Koeppen said people who chose to take on the projects themselves often spent more in the long run than if they went with a pro in the first place. In many cases, to undo the damage and start over, she said, the project ends up being much more expensive.