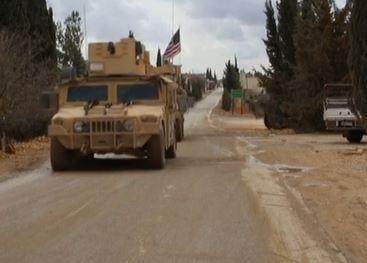 Director of National Intelligence Dan Coats said Wednesday morning that a decision was made Tuesday about U.S. troops in Syria and whether they will be withdrawn, CBS News' Mary Walsh reports, and he said that a statement would be released shortly.

But soon after Coats made the remark, White House press secretary Sarah Sanders issued a statement that said nothing about troop removal from Syria. Nor did it offer a timeline.

"The military mission to eradicate ISIS in Syria is coming to a rapid end, with ISIS being almost completely destroyed," the statement said. "The United States and our partners remain committed to eliminating the small ISIS presence in Syria that our forces have not already eradicated. We will continue to consult with our allies and friends regarding future plans. We expect countries in the region and beyond, plus the United Nations, to work toward peace and ensure that ISIS never re-emerges."

CBS News "Face the Nation" anchor Margaret Brennan reports that at the all-hands-on-deck Syria meeting Tuesday, President Trump was seized by the idea of a complete U.S. military withdrawal from Syria. He had said earlier in the day that he would decide "very quickly" whether to remove troops from Syria, declaring that their primary mission had been to defeat the Islamic State insurgents, and "we've almost completed that task."

Despite the opposition of Defense Secretary Jim Mattis and Joint Chiefs Chairman Joseph Dunford, as well as his entire national security team, Mr. Trump said he wants to completely pull out of Syria within "months." Brennan reports that Dunford and Mattis tried to intervene, and when Mattis said that this would be an inadequate amount of time to complete the mission, he was told the decision had been made. The president also does not want to continue the U.S. stabilization efforts and believes the Saudis will for the bill for efforts to de-mine and clear the areas liberated from ISIS. Those efforts also include restoring water, power and other infrastructure.

Mr. Trump did not seem to be convinced by arguments that a rapid withdrawal will result in handing the territory over to Iran and Russia or that ISIS has not been dealt an "enduring defeat." He was complaining that the U.S. is doing it it all and needs to get out.

The Syria meeting did not provide the clarity the State Department was looking for on Friday's decision by the White House to halt $200 million funding for U.S. reconstruction efforts in Syria, CBS News' Kylie Atwood reports, based on her conversations with three State Department officials. The projects to restore essential services for Syrians -- including de-mining -- will continue only until the 2017 money runs out, which should be in a matter of weeks.

Mr. Trump has said that he wants other countries to foot the bill for reconstruction and stabilization efforts, but no other country or body has yet officially agreed. The State Department is not part of those discussions at this time. They are being led by Trump. Before Tuesday's meeting, the State Department tried to remind the Pentagon ahead of the White House meeting that the stabilization programs often create a safer environment for U.S. boots on the ground. The fact that these programs were not a focal part of the discussion indicates that the military had its own fight to consider -- Mattis focused on making the case for giving military operations more time in Syria, which Mr. Trump is resisting.

Before former Secretary of State Rex Tillerson left office, he gave a speech laying out the administration's Syria policy. That included a commitment to staying in Syria until the fight against ISIS is finished. He also described efforts to take on Iran in the region, as a whole. He warned that "disengagement from Syria would provide Iran a golden opportunity to further strengthen its position in Syria. Mr. Trump was said not to have receive that open-ended speech well.

President Trump has asked Saudi Arabia to contribute more money to the efforts on the ground in Syria, though there is no formal commitment on that yet. A Saudi official told CBS News that, as of March 2018, the Kingdom of Saudi Arabia has donated nearly $820 million to support Syria since the inception of the Syrian civil war. This aid has been in the form of food and water security, sanitation projects, emergency relief, shelters for displaced Syrians, education, among others, and has been distributed in a concentrated manner across various locations, including: Syria, Jordan, Lebanon, and Turkey."

The Pentagon is also not convinced that the fight against ISIS is over.

General Joseph Votel, head of U.S. Central Command, said that good military progress has been made in Syria but the "hard part, I think, is in front of us." He said there is a need to stabilize areas, consolidate military gains, get people back home and address long term issues of reconstruction. And Votel argued that "there is a military role in this" because the stabilization efforts can only take hold if there is peace on the ground.