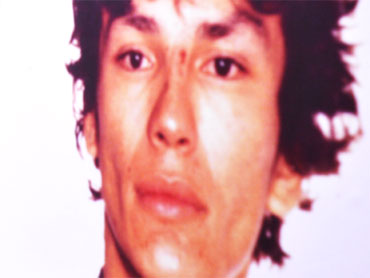 On Thursday, Pera — who revived the case about five years ago — and San Francisco police said DNA evidence has linked the infamous serial killer known as the "Night Stalker" to the April 10, 1984 homicide.

"I was a new police officer at the time. That's part of the reason that the case was relooked at," Pera said. "It's the type of case as a new officer, a case involving a little girl, that you don't forget."

Ramirez, 49, is being held on death row at San Quentin State Prison after being convicted in 1989 in Los Angeles of 13 murders.

The Los Angeles-area murders in 1984 and 1985 terrorized Southern California, with reports of satanic symbols left at bloody murder scenes by a killer who entered homes through unlocked windows and doors. Ramirez was captured by angry residents who recognized him as he tried to carjack a woman in her driveway.

Ramirez previously has been tied to killings in Northern California. He was charged in the shooting deaths of a San Francisco man named Peter Pan, 66, and his wife, Barbara, in 1985 just before his arrest in Los Angeles, but he was never tried.

Mei was murdered in the basement of a residential hotel in San Francisco's Tenderloin neighborhood where she lived with her family.

Police said Ramirez at the time was staying at two different hotels in the same neighborhood.

When Pera and her partner, inspector Joseph Toomey, revisited the case, crime lab technicians extracted DNA samples from items collected from the crime scene 25 years ago. Police would not say what the items were.

Matthew Gabriel, a DNA technician at the crime lab, said the sample was run through CODIS — the Combined DNA Index System — a database with samples from 1.2 million people, including convicted criminals.

The database returned a "cold-hit," which means the sample collected from the Leung crime scene matched Ramirez' DNA profile in the database.

The girl's family still lives in San Francisco, police said, and were grateful when told of the break in their daughter's case.

"It's painful for them. Hopefully it brings closure," said Deputy Chief David Shinn.

On Wednesday, Pera and Toomey traveled to San Quentin and served Ramirez with a warrant to get a confirmation DNA sample. It will be used to confirm a match on the sample in the CODIS database. If the match is confirmed, the case goes to the district attorney, who decides if charges will be filed.

Michael Burt, Ramirez' attorney during the murder trial, did not return a call Thursday seeking comment.

Cops unsure if girl killed in shootout was abducted or went "willingly"
Thanks for reading CBS NEWS.
Create your free account or log in
for more features.
View CBS News In
CBS News App Open
Chrome Safari Continue
Be the first to know
Get browser notifications for breaking news, live events, and exclusive reporting.