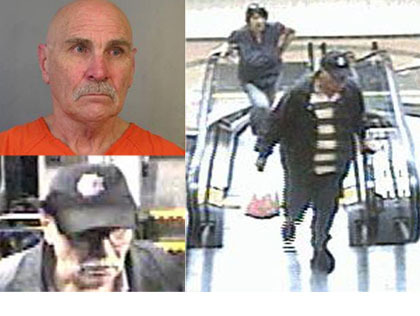 DENVER - DNA evidence taken from a homemade bomb at a Colorado shopping mall led investigators to identify the suspect as a convicted bank robber who had just been released from prison, according to a court document released Wednesday.

The criminal complaint said DNA evidence from the bomb matched the DNA profile of 65-year-old Earl Albert Moore in a national database.

Moore was arrested Tuesday on suspicion of leaving a pipe bomb and two small, camp stove-style propane tanks at the Southwest Plaza Mall in the south Denver suburbs on April 20.

Authorities said the bomb didn't explode and no one was injured, but the criminal complaint said at least one of the tanks was on fire and that the fire damaged electrical equipment, including a meter.

The criminal complaint said an employee of a mall store smelled smoke coming from a service corridor, and when he went to investigate he saw flames coming from one of the propane tanks.

After firefighters extinguished the blaze, investigators found the two propane tanks taped together, paper stuffed beside the tanks and beside an electrical box, packaging from a box of matches and several partially burned wooden matches, the complaint said.

It said one end of the pipe bomb fell off while the bomb squad was securing it, and a black powder spilled out.

The bomb components, matches and debris were sent to an FBI laboratory in Virginia. DNA found on the material matched Moore's DNA profile in a national database called the Combined DNA Index System, the complaint said.

Investigators obtained Moore's Colorado driver's license photo and a booking photo from the Jefferson County, Colo., jail, and that they matched the man shown on surveillance video from the mall and elsewhere, the complaint said.

Moore is due in court later Wednesday.