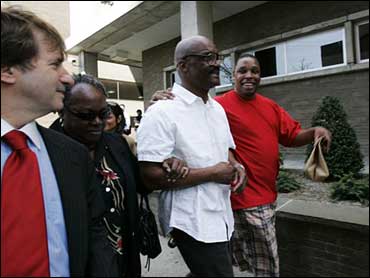 A judge threw out convictions Tuesday against a man who served more than two decades in prison for the rape and murder of two children after a DNA test showed a neighbor may have committed the crimes.

The new DNA evidence would probably have changed the verdict against Byron Halsey, said Superior Court Judge Stuart L. Peim, who vacated the verdict and granted a new trial.

"I just want to thank Jesus," Halsey said after walking out of the Union County Jail. He gave a quick embrace to one of his lawyers, then joined his mother and brother for long hug.

Prosecutors were expected to announce at a July 9 hearing whether they would pursue a new trial or drop the charges. Until then, Halsey was released on $55,000 bail and ordered to wear an electronic monitoring ankle bracelet.

"Today, we can say with scientific certainty that Byron Halsey is innocent," said Vanessa Potkin, a lawyer with the Innocence Project, which is representing Halsey. "It has taken more than two decades, but DNA has finally revealed the truth in this case."

Halsey, 46, was convicted in 1988 of murdering and sexually assaulting Tyrone and Tina Urquhart, the children of his girlfriend, with whom he lived at a Plainfield rooming house.

Their mother, Margaret Urquhart, said in a statement issued through the Innocence Project she had doubted Halsey's guilt.

"I knew Byron loved Tyrone and Tina," Urquhart said. "It didn't make sense to me that he could have done this. I always had my doubts, but I didn't know what to do about them."

The new DNA test shows a neighbor, Clifton Hall, 49, was the source of semen found at the scene. Hall, who testified against Halsey at trial, is now in prison for three sex crimes in early 1990s, authorities said.

It was not clear whether he had an attorney, and state corrections officials did not immediately respond to a request for comment from Hall.

Halsey gave a confession after he was interrogated for 30 hours during a 40-hour period, Innocence Project co-director Barry Scheck said.

"It would be a stretch to say that Byron Halsey even confessed to this crime given the state of mind he was in, the length of the interrogation, the tactics police used, and the words he actually said," Scheck said.

Halsey had been sentenced to two life terms, plus 20 years. He has been in custody since 1985.

Halsey can apply for compensation of $25,000 for each year he was in custody, Potkin said.