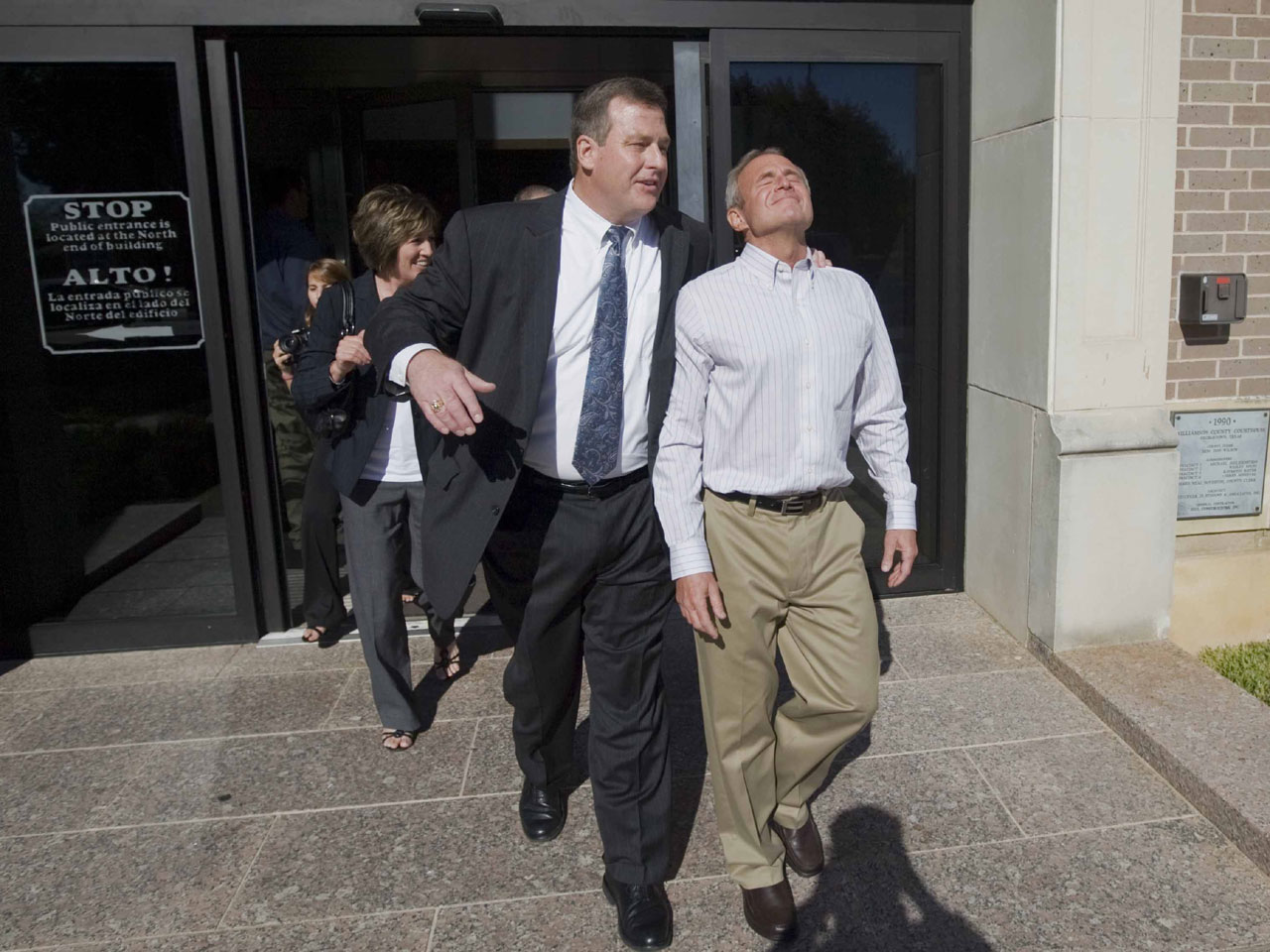 AUSTIN, Texas - Caitlin Baker was 3 when her mother, Debra, was beaten to death and left naked in bed in her Austin home. Although the pain of the loss has faded in the 23 years since, her anger that her mother's killer was never caught has not.

Less than two years before that January 1988 slaying, unbeknownst to all but a few people until recently, the mother of another woman bludgeoned to death in bed during an attack at her home about 15 miles away told an investigator that her 3-year-old grandson watched a "monster" do the killing, not his father, as police suspected. She urged him to pursue other leads, but her daughter's husband, Michael Morton, was instead convicted of murder and sentenced to life.

New DNA testing linked the killings of Debra Baker and Christine Morton to another man with a prison record in several states. Police have not publicly identified the suspect, whom they are trying to locate, but his genetic links to both slayings led to Morton's release from prison last week after nearly 25 years behind bars, and his formal exoneration by an appeals court on Wednesday.

But lawyers for the Innocence Project, a New York-based group that spent years fighting for DNA testing in Morton's case and the release of his police case files, say he likely never would have been convicted if the prosecutor in charge of the case hadn't withheld key evidence from the defense, including his mother-in-law's statements.

And if, as the lawyers contend, investigators disregarded and hid evidence that cast doubt on Morton's guilt, could they have more doggedly pursued leads that might have helped them prevent Baker's killing?

In filings before state District Judge Sid Harle, the Innocence Project has alleged misconduct by Ken Anderson, now a sitting judge in Williamson County just north of Austin, who was the county's district attorney at the time, and prosecuted Morton's case. The charges could lead to the state bar taking disciplinary action against Anderson, or Harle himself possibly urging state and federal prosecutors to investigate, said Barry Scheck, the Innocence Project's co-founder.

"I would certainly hope that if it's true, there's some sort of consequence. But I don't think that would happen," she said. "I don't have a lot of faith in the Williamson County justice system. They couldn't do it 25 years ago. Why would they do it now?"

Ken Anderson, who was appointed to the bench in 2002 by Gov. Rick Perry, did not respond to several requests made through his court administrator to discuss the Morton case and address the allegations. Police Sgt. Don Wood, who led the investigation, has since retired and could not be located for comment.

John Bradley, the current district attorney for Williamson County, said the Innocence Project's charges "are just allegations. No one has offered any proof."

He added, "these are matters that will likely be investigated, but let's not get ahead of ourselves."

Morton, who has declined to be interviewed until Wednesday's ruling exonerating him officially takes effect next month, told investigators that his wife and son were fine when he left for work at an Austin Safeway on August 13, 1986, and that an intruder must have later forced his way in and killed her. He was convicted on circumstantial evidence.

Morton steadfastly maintained his innocence, and he enlisted the support of the Innocence Project, which specializes in helping prisoners overturn wrongful convictions through DNA testing.

In 2006, Morton's lawyers sought DNA testing on a bloody bandanna found near the family's home on the day of the killing. The bandanna wasn't submitted as evidence during the trial and it hadn't been tested for DNA because the necessary technology wasn't available in 1986. Bradley fought their request for years, arguing that the bandanna wasn't relevant to the case.

"Let's face it, I was wrong. But it was a legal argument," he said. "Let's not try to paint this as some sort of personal decision."

Bradley, who was not involved in prosecuting Morton's original case, also opposed a 2008 Public Records Act request by the Innocence Project, through which it was eventually able to obtain the police records that it says show Anderson concealed information to ensure Morton's conviction. Bradley argued that releasing the documents could hinder ongoing investigations, but he was overruled by Texas Attorney General Greg Abbott.

Among the records that hadn't been turned over to Morton's trial attorneys was Woods' interview with Christine Morton's mother in which she said her grandson described watching a "monster" — a man who was not his father — beat his mother to death with a wooden object.

Morton had testified at his trial that the assailant made off with his wife's purse. Unbeknownst to him and his attorneys, the police records show that Wood knew Christine Morton's credit card was used in San Antonio two days after her death and a forged check in her name was cashed a week after that.

None of that came up at trial because prosecutors didn't call Wood to testify, and, according to the Innocence Project, at that time police investigator files could only be brought up in court if the prosecution called the investigator to the stand.

Unable to question Wood or see his records, the defense asked presiding trial Judge William Lott to review all case materials. The Innocence Project contends that Anderson told Lott he'd confer with Wood to ensure the court got all of the investigation records — but that Lott only received a fraction of them and never knew about the allegations by the couple's son, or the use of Christine Morton's credit card or check. After reviewing the records he did receive, Lott determined that they weren't relevant to the trial.

All these years later, Morton has been declared innocent, and Austin police have told Baker they've reopened her mother's case — though they won't divulge the suspect's identity, or say how close they are to catching him.

"It hasn't changed anything yet," she said. "Unless something actually happens, I can't think about it."