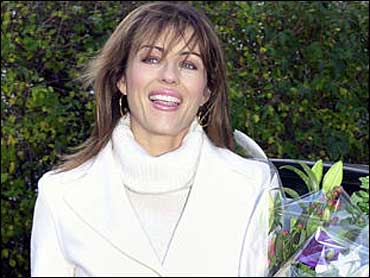 DNA tests have determined that Hollywood producer Steven Bing, who sparked a tabloid frenzy when he questioned the paternity of Elizabeth Hurley's baby, is indeed the father of the 2-month-old boy.

The test results were disclosed Wednesday at a hearing in the Family Division of the High Court in London.

The 37-year-old "Austin Powers" actress and model, who has always maintained that Bing is the father, could now receive millions of dollars in child support. The 35-year-old California film producer is believed to be heir to a $400 million property fortune.

Bing had previously declared that he would provide Damian with financial support and play a part in his upbringing if it was proved that he is the father.

When Hurley disclosed in November that she was pregnant, she immediately named Bing as the father. The pair had reportedly been in a yearlong relationship after she split with actor Hugh Grant.

But Bing issued a public statement in December casting doubt on her claims.

"Ms. Hurley and I were not in an exclusive relationship when she became pregnant. It is her choice to be a single mother," it read. "If indeed I am the father, I will be an extremely involved and responsible parent."

Hurley hit back by saying she was "deeply distraught" at Bing's claims and insisted she had been "completely loyal and faithful" to him.

Bing began legal proceedings in April to establish paternity, two weeks after Damian was born, a move that Hurley branded "astonishing." Bing claimed he had been unable to reach her to discuss paternity but said he hoped for an amicable solution.

Hurley had kept a relatively low profile since Damian's April 4 birth. But she returned to the social scene last week in show-stopping fashion, wearing a skintight ivory gown to a charity gala.