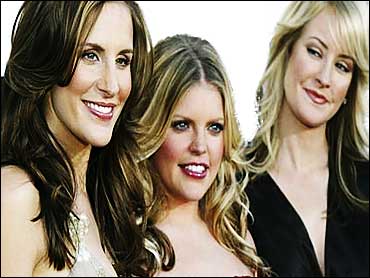 The Dixie Chicks exploded onto the music scene back in 1998 with their debut album, "Wide Open Spaces."

The three ladies performed on The Early Show the singles "Long Time Gone," Landslide, "Cowboy Take Me Away" and "White Trash Wedding" from their new CD "Home."

Natalie Maines, 27, and sisters Marty Maguire, 32, Emily Robison, 30, said their new CD reflects closely the artists they are and named the album "Home" because it was recorded in their home state of Texas.

The Dixie Chicks said the album was a happy accident that came together when they found themselves all together living in Texas after several years of non-stop touring. In fact, the girls say "Home" really began to take shape during gatherings at Maines's living room before then proceeding to Cedar Creek Studio. "We were all back in Texas now and we just started the album really to do demos," said Maines. "We just went in and made the music we wanted and had no idea where the effort was going. It just turned into our third album."

The Chicks' tale begins in the late '80s when sisters Maguire, playing the fiddle and backing vocal, and Robison, playing the banjo, dobro and backing vocals, teamed up with vocalists Laura Lynch and Robin Macy as the Dixie Chicks. These Chicks slowly made a name for themselves regionally and eventually they recorded three independent releases in the early '90s. In the mid-'90s, Maguire and Robison decided to reconfigure the band and search for new personnel, namely a lead singer.

Maguire and Robison were introduced to Maines by Maines' father, Lloyd Maines. "I've always seen the Dixie Chicks as pre-Natalie and post-Natalie," said Robison. "I feel like it was a completely different band before we got our lineup with Natalie. Before that, there were growing years and they were wonderful, but it was completely different music. A band is a sum of its parts. So we kept the name, but so much else changed. We found who we were, and what music we were capable of, when we found Natalie."

They went on to record multi-million selling albums but the sweet music of success didn't eliminate the band's disagreement with their record label. The Chicks put together the "Home" album as they were going through a lawsuit with Sony.

Last summer, after the trio approached Sony about renegotiating their record deal, Sony filed a lawsuit against them for breach of contract. The Dixie Chicks responded with a suit of their own, charging that Sony had withheld $4.1 million in royalties. An 11-month legal battle ensued along with speculation about whether the trio would leave Sony. Then, surprisingly, the parties settled out of court. The terms of the agreement weren't made public, but the Los Angeles Times reported in June that the deal included a $20 million bonus for the group and an increase in its royalty rate to about 20 percent.

"When we made the album, our minds were in a place of no pressure," said Maguire. "To us it was about getting back to work and creating again after Natalie had been off with her baby. We reconnected with some of the musical styles that influenced us as young musicians and singers without the added pressure of label or radio expectations. When I listen to the album I'm most proud of what we did without thinking too hard — without the intention of even putting it out there. I feel really good that it's gotten such a great reaction from people whose opinions we value, when it was such a personal endeavor. This feels like something we made in our living room."

" We've all bought our permanent homes here [in Texas] and everybody is happily married now," said Maines, who is seven months pregnant. "We've got one baby and one on the way. Definitely we're all nesting and it was great to get to work with my dad and to do it in Texas. Every album we've done has been a reflection of where we are, with having families and really finding our places in this world."

The Dixie Chicks co-produced the album with Lloyd Maines, an accomplished musician himself.

"I think in our hearts we feel like we had a lot to do with the production of our first two albums, but at that point, we weren't credited and we didn't want to be credited," said Maines. "Personally, I think 'Home' is our best album and our best sounding album yet."