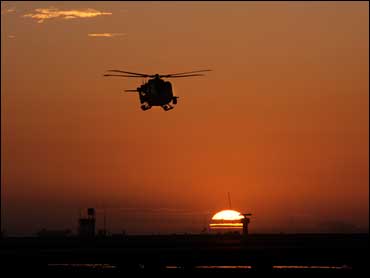 Despite a little history made by Tim McGraw and Faith Hill at the Country Music Association awards, the night and the year belonged to the Dixie Chicks.

The trio from Texas was named best entertainer and best vocal group on Wednesday, and took home awards for best album for Fly and video for Goodbye Earl.

In an interview with CBS News Entertainment Reporter Mark McEwen, the Chicks say they worked hard and it means a lot to them that what they're doing has been recognized.

The awards come the year the multimillion selling act toured for the first time as a headliner.

"We want to thank every person who bought a ticket to our show," Dixie Chicks lead singer Natalie Maines said.

McGraw won the best male vocalist award, and his wife Hill won best female vocalist. It was the first time a husband and wife won those awards the same year.

"I would rather not have won it if Faith hadn't won it," McGraw said.

Hill and McGraw, who won the vocal event award together in 1997, thanked each other from the stage of the Grand Ole Opry House.

"I feel so alone," Hill said while accepting her trophy. "My husband's not out here. I don't know who to hug. Can I hug somebody?"

From the audience McGraw threw her a hug, just minutes after winning his award and calling Hill "my soul mate, my wife, who's my inspiration."

Two songs that have raised eyebrows in Nashville were acknowledged.

Alan Jackson and George Strait won the best vocal collaboration award for Murder on Music Row. The song accuses the country music industry of killing the traditional country music that made its name.

But Strait undercut those who think the song is a rallying cry to change things in Nashville.

"I don't know how seriously this song was written, but it was (recorded) as kind of a joke," Strait said.

The video award for Goodbye Earl surprised some because it has been criticized for treating premeditated murder as a lighthearted romp. In the video, the bad guy - a wife beater - is poisoned and his body dumped into a lake.

"It's a funny song and a funny video about a very serious topic," Maines said. "A lot of women die at the hands of their husbands."

The inspirational ballad I Hope You Dance, about how people should seize the day, won awards for best single and song. The latter went to songwriters Mark D. Sanders and Tia Sillers.

Lee Ann Womack, who won the prize for best single, performed I Hope You Dance backed by five ballerinas dancing around a maypole during the live CBS telecast.

The Dixie Chicks performed Sin Wagon, in which they sing about "mattress dancing," with flames projected on stage.

The female stars got some kudos from country music superstar Reba McEntire, who collected an International Award Achievement Honor for her work in promoting country music outside of th U.S. "I'm very proud of the women tonight," said McEntire. "I thought they kicked butt. They were innovative and creative and they're very talented and beautiful."

Brad Paisley won the Horizon Award, given to someone expected to have a long, successful career. Montgomery Gentry took the best vocal duo trophy - the first time in nine years that Brooks & Dunn didn't win the award.

Charley Pride and the late Faron Young were inducted into the Country Music Hall of Fame during the 34th annual awards ceremony held at the Grand Ole Opry House.

About 6,000 workers in the country music industry nominate and vote for the winners.