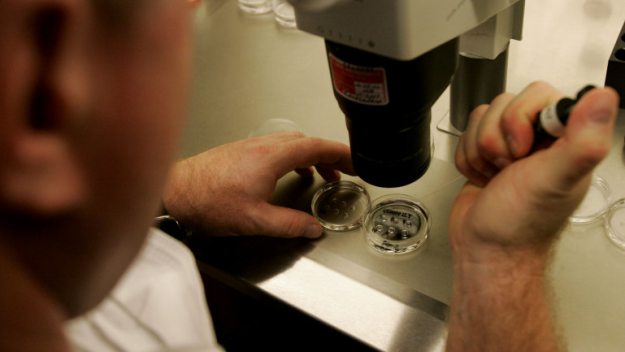 SAN FRANCISCO -- A battle between a divorced couple has begun in San Francisco over the fate of their frozen embryos - and it could lead to new California law.

Dr. Mimi Lee and Stephen Findley created the embryos after Lee learned she had cancer. She survived but was left infertile. She wants the embryos implanted into a surrogate. Findley, who filed for divorce two years ago, wants them destroyed.

In court Monday, Findley said the couple signed consent agreements to destroy the embryos if they divorced. His lawyer also alleged that Lee was using the embryos as blackmail in their divorce proceedings.

Lee's lawyer, however, says she has a fundamental right to procreate and the embryos are her only chance.

"We feel that our client has the more compelling argument, because she is now infertile," Peter Skinner, Lee's attorney, told CBS San Francisco.

"If you're going to be giving up give up such a fundamental right as your ability to have your biological child going forward, you should have a little bit more of a rigorous test, a rigorous process than simply checking the boxes on a form like this," Skinner said.

David Magnus of the Stanford Center for Biomedical Ethics told CBS San Francisco that while he sympathizes with Lee's desire to have her own children, courts generally see these cases as a matter of legal contract.

"The ethical framework that has been largely been agreed upon has been that this is the sort of thing that's ought to be worked out in advance as much as possible. And in this case, it was decided that in the event of a divorce, the embryos are not to be used," Magnus said.

The case is being heard without a jury.