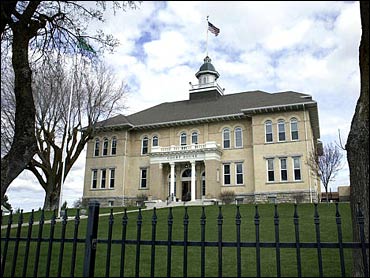 Monday is Divorce Day in the Lincoln County Courthouse.

In the morning, a clerk brings bins and mailbags from the post office full of new filings for dissolution of marriage. In his office one floor up, Superior Court Judge Philip Borst gets writer's cramp signing final decrees in marathons that can last six hours or more.

This is the quickie-divorce capital of Washington. It is one of the few counties in the nation where marriages can be dissolved by mail without a court appearance.

Paralegals and attorneys from across the state swamp County Clerk Peggy Semprimoznik's office each week with filings for Washington state residents desiring to shed their spouses more quickly and inexpensively than they can in the counties where they live.

This wheat farming county of just over 10,000 people handled 4,035 domestic filings last year, most of them divorces, Semprimoznik says. That is more than any other county except King, home to more than 1.75 million residents in and around Seattle, which had 5,487 domestic filings, according to the state Health Department.

"If I had my rathers, I'd rather people stayed married and had a happy marriage," Borst says. But he says many of the couples have tried marriage counseling without success and cannot afford a drawn-out divorce.

Dissolving their marriages with the stroke of the pen can save them money and ease the strain on the whole family, he says.

"From practical experience, once they get to court and fight, they can't agree and kids suffer and they suffer," Borst says.

Typically, Borst's signature makes a divorce final in a little more than the 90-day waiting period mandated by the state. In some of the state's larger counties, where court appearances are required, dockets are crowded with other matters and divorces can take a year or longer.

The Lincoln County rule that says a court appearance is not required in uncontested divorces was adopted in 1983 by a judge who was convinced it would be a time-saver. Judges have the right to issue such rules. At least two other small Washington counties follow the same practice.

As for the rest of the country, Kate Hagan, director of the American Bar Association's family law section in Chicago, says she has not heard of any other counties that allow divorces without a court appearance. Nor has Katy Robinson, a spokeswoman for the National Conference of Commissioners on Uniform State Laws, a Chicago group that helps legislatures draft legislation.

The ease with which a couple can split up upsets a Washington family group called Families Northwest and some church pastors in this town about 35 miles west of Spokane.

Pastor Jon Hammond of the Harvest Celebration Church, an Assembly of God congregation about a block from the sandstone courthouse, suggests the county use revenue from divorce filings for counseling.

"If we make it harder to get a divorce, it might give them time to think it through. And maybe they'll realize divorce is not what they want to do," he says.

He explains: "We are an agricultural, farming community, very conservative, mainly Republican. A lot of churchgoers. A lot of families with children. It just is contradictory to our lifestyle."

Lincoln County charges a $120 filing fee, plus $20 when the divorce becomes final. The county last year earned $489,000 from domestic filings, or about one-ninth of the annual budget.

Because of the huge number of filings, the weekly Davenport Times long ago stopped publishing complete lists of all couples getting divorced in Lincoln County. The paper now runs only the names of the 40 or so Lincoln County couples who split up each year.

Nancy Ballantyne, who until recently lived on Whidbey Island, near Seattle, got divorced in Lincoln County recently, ending a 27-year marriage that raised 10 children and stepchildren. She mailed in her divorce papers Jan. 10, serving as her own lawyer.

"I would recommend it. It's such a painful time for both parties. To me, the least you have to go through is so much easier," she says.

Her ex-husband, a retired military man, did not contest the divorce, there was little property to divide and there were no child custody issues, she says.

"I was just willing to walk away," she says. "I just left with two suitcases and a box."

Florida is the least affordable place to live in the U.S.
Thanks for reading CBS NEWS.
Create your free account or log in
for more features.
View CBS News In
CBS News App Open
Chrome Safari Continue
Be the first to know
Get browser notifications for breaking news, live events, and exclusive reporting.