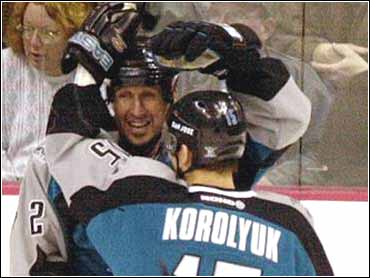 Thursday night, he made people remember.

Shields, starting only his seventh game of the season, had 38 saves, including seven in overtime, as the San Jose Sharks and Colorado Avalanche skated to a 2-2 tie.

Ray Bourque scored the tying goal at 5:45 of the third period.

In a battle of division leaders, Colorado had a 40-21 edge in shots and also had a power-play opportunity in overtime, but Shields stopped all four Avalanche shots during the man advantage.

"Shields played an awesome game for them," Bourque said. "At the end of overtime, he was the difference."

Shields, one of only 14 goalies to record 25 wins last season, lost his starting job when he was sidelined early in the season by a sprained ankle and Nabokov won NHL rookie-of-the-month honors in both November and December.

"In overtime, we did everything but score," Colorado coach Bob Hartley said. "The execution was there and the puck movement was there, but you have to give credit to the Sharks and Steve Shields, who played a strong game."

"(Joe) Sakic had a tough one, and (Milan) Hejduk took a slap shot and hit my glove," he said. "There were a few tough saves, and you have to be lucky on all of those."

Sharks coach Darryl Sutter, angry about the holding penalty called on Gary Suter in overtime, refused to talk with the media after the game.

"We weren't happy with th penalty in OT," assistant coach Rich Preston said. "When you get a call like that, the goaltending has to be outstanding, and it was. He was tested all night long. He hasn't played a lot, but he has always been ready to play when called."

Patrick Roy had 19 saves for Colorado.

In a cautiously played first period, San Jose took a 1-0 lead despite being outshot 10-5.

The Sharks squandered a power-play opportunity when, just 21 seconds after Colorado's Shjon Podein went off for holding the stick, Owen Nolan knocked down Roy behind the goal, drawing a goaltender interference penalty.

At 15:14, after a turnover by Colorado defenseman Martin Skoula, Bobby Dollas was awarded a goal when Avalanche defenseman Aaron Miller, sprawling in the left circle, attempted to clear the puck but instead sent it sliding across the goal line.

Colorado finally solved Shields at 17:23 of the second period on Alex Tanguay's 16th goal. Tanguay raced down the right side, then sliced through traffic in front of the goal.

Shields had nice back-to-back saves later in the period, stopping a long shot by Bourque and then handling Peter Forsberg's rebound attempt.

San Jose went ahead 2-1 early in the third period when Stephane Matteau scored on a rebound at 3:21.

Bourque tied it moments later. After Joe Sakic won a faceoff, Bourque scored just five seconds into a power play, putting a long shot past Shields to extend his NHL record for goals by a defenseman to 408.

Colorado defenseman Adam Foote did not return after separating his right shoulder in the second period on a hit in the corner by Owen Nolan. Hartley said the Avs would wait until Foote is re-evaluated on Friday before deciding whether to promote a player from Hershey.

"It's obviously a big loss," Hartley said, "but we have a big road trip coming up and we will have to pick up the slack. We still have 20 healthy bodies."

Trucker who drove toward crowd of protesters to be released