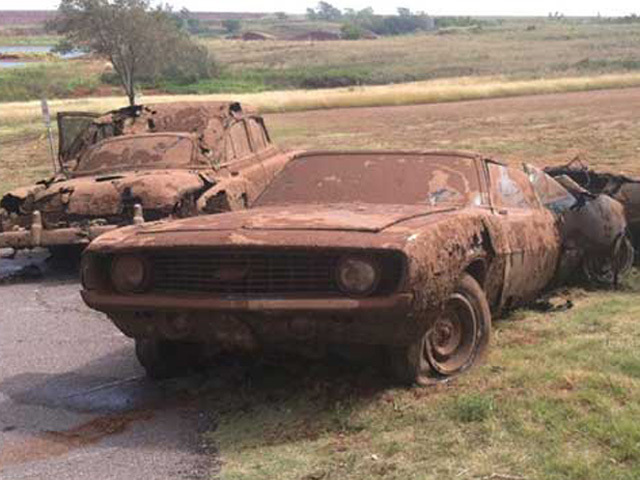 (CBS/AP) ELK CITY, Okla. - Authorities in Oklahoma on Tuesday recovered two vehicles from a lake that contain the skeletal remains of six people who may have been missing for decades, according to CBS affiliate KWTV.

The cars recovered from Foss Lake in western Oklahoma may solve cold cases from the late 1950s and 1970.

The Daily Elk Citian reported that the vehicles appear to match a Camaro missing with three Sayre teenagers since 1970 and an older Chevrolet with a Canute couple and a third person missing since the late 1950s or early 1960s. KWTV reports It's unknown who authorities believe the third body found in this car belongs to.

Authorities have not identified any of the six remains found.

"It's just been under water for 40 years. It's a mucky mess," Custer County Sheriff Bruce Peoples told KWEY radio.

In addition to the Custer County Sheriff's Department, the Oklahoma Highway Patrol, the Oklahoma Bureau of Investigation, and the state medical examiner's office were on scene Tuesday.

Authorities discovered the cars on accident. Betsy Randolph, spokeswoman for the Oklahoma Highway Patrol, said dive teams were at Foss Lake conducting training with sonar when they came upon the vehicles last week.

"So they went back and did a scheduled dive today and were going to recover the cars. When they pulled the cars out of the water, the first one that came out they found bones in the car," she said.

When they pulled the second car out, another set of bones was discovered. The divers then went back in the water and searched around and found a skull, she said.

The remains were turned over to the medical examiner's office.

"We thought it was just going to be stolen vehicles and that's not what it turned out to be, obviously," Randolph said.

She said the Highway Patrol is hoping the discovery will offer some relief to families who may have gone decades wondering where a missing loved one was.

The station reports the bodies in one of the cars could belong to Jimmjy Allen Williams, 16, Leah Gail Johnson, 18, and Thomas Michael Rios, 18. The teens were reported missing on November 20, 1970. They were last seen driving around Sayre in Jimmy's 1969 Chevrolet Camaro.