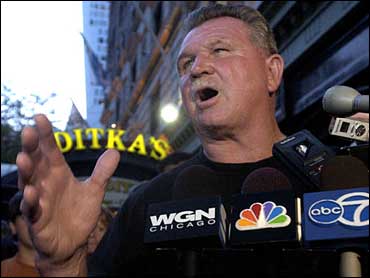 "There was a moment when I said, God, I'd like to take this and run with it, and then I said, you know, put your head on straight and think about what you're getting into," the pro football Hall of Famer said outside his Chicago restaurant Wednesday night.

State Republicans have been scrambling to find a challenger for Democrat Barack Obama since the winner of the Republican primary, investment banker-turned-teacher Jack Ryan, dropped out nearly three weeks ago.

Ryan quit amid allegations in divorce papers that he took his wife, "Boston Public" and "Star Trek:Voyager" television actress Jeri Ryan, to sex clubs before they split up.

Polls show strong support for Obama, a state senator whose flair on the stump has helped attract money and a national following. The Democratic Party on Wednesday offered Obama a national stage, announcing he would be a keynote speaker at the party convention later this month. Obama's father is from Kenya and his mother is from Kansas.

Wearing a black T-shirt, Ditka made his announcement at a news conference that drew onlookers who spilled into the street outside his restaurant.

He acknowledged that the sometimes fiery temperament that prompted him to answer taunting fans with obscenities in the days when he coached the floundering New Orleans Saints might not be a perfect fit on Capitol Hill.

He also suggested that what he called his "ultraconservative" views might clash with many Illinois voters, saying, "I don't want to talk about gay marriage."

A moment later, he said: "I don't care whether some judge of the Massachusetts Supreme Court says it's right. It's not right. It's wrong."

With Ditka's exit, the Illinois Republican State Central Committee, which will choose the nominee, is left with few choices for the seat being vacated by retiring Republican Sen. Peter Fitzgerald.

A number of top Republicans have declined to take Ryan's place on the ballot, including state treasurer and Republican chairwoman Judy Baar Topinka, former Gov. Jim Edgar and veteran state Sen. Steve Rauschenberger, who was considered a top candidate until he took his name out of the running last week.

Among other possibilities are businessman James Oberweis, who finished second to Ryan in the March primary but alienated many with his attacks on undocumented immigrants, and Andrea Grubb Barthwell, the Bush administration's former deputy drug czar but an unknown in Illinois.

Meanwhile, Jack Ryan had not filed the paperwork needed to officially withdraw his name from the ballot as of Wednesday.

Ryan told WMAQ-TV in Chicago Wednesday night that he just hadn't had time. "I have no intention of re-entering this race," he said.