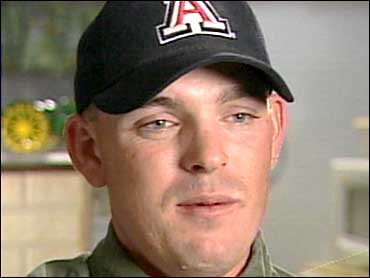 Over the last few years, CBS News Correspondent Steve Hartman has searched high and low across America to prove his theory that "Everybody Has A Story." He uses a map and the toss of a dart as his guide.

This week's story begins deep in the Arizona desert. About 15 feet deep, where every day, a nice, young man goes about his God-awful job of digging trenches, laying pipe. And here comes the awful part: filling them back up again.

"OK. Here comes the dirt," 27-year-old Jason Larson hears from above. He tilts his head down, closes his eyes and the dirt starts falling on him.

Jason says, "It's not a job that many people in the world would even fathom doing, you know?"

When he gets home, his wife holding their beautiful baby asks, "How was your day?"

"Dirty and dusty," he replies.

He and his wife, Amanda, are about to buy a house. In fact, they just signed the papers.

"This is definitely the biggest check I've ever written," she says.

Jason Larson says nothing could make his life better, with one possible exception. Larson says he may not want to do this forever. Actually, his passion is in law enforcement. He's a police academy graduate and a reserve for the local sheriff's department.

He says, "It's something that I found that I can go out and do and I can make a difference in my community."

If he wanted, he could probably get a full-time job doing it. Better benefits, more money, less laundry, which begs the question, what the Sam Hill is he waiting for? Well, for Jason Larson, digging trenches isn't just a job. It's a birthright.

His father says, "There's a heritage that the Larson family has left and I'd like him to be a part of that."

His father, Kent, owns the pipe-laying company, which he, too, took over from his father.

Since Jason Larson was in junior high, they've been grooming him to be next.

His father says, "I would love for him to follow my steps."

But it's not a huge business. The company ladder only has a couple of rungs and Jason Larson could be on the bottom for a while.

Jason Larson notes, "If you have a fortune-cookie answer, I would love to have it. One day, I'll have to have that conversation with my pop."

In the end, Jason Larson may decide not to stay in the family business. But when you raise a kid with compassion and integrity, he follows in your footsteps, wherever he goes.