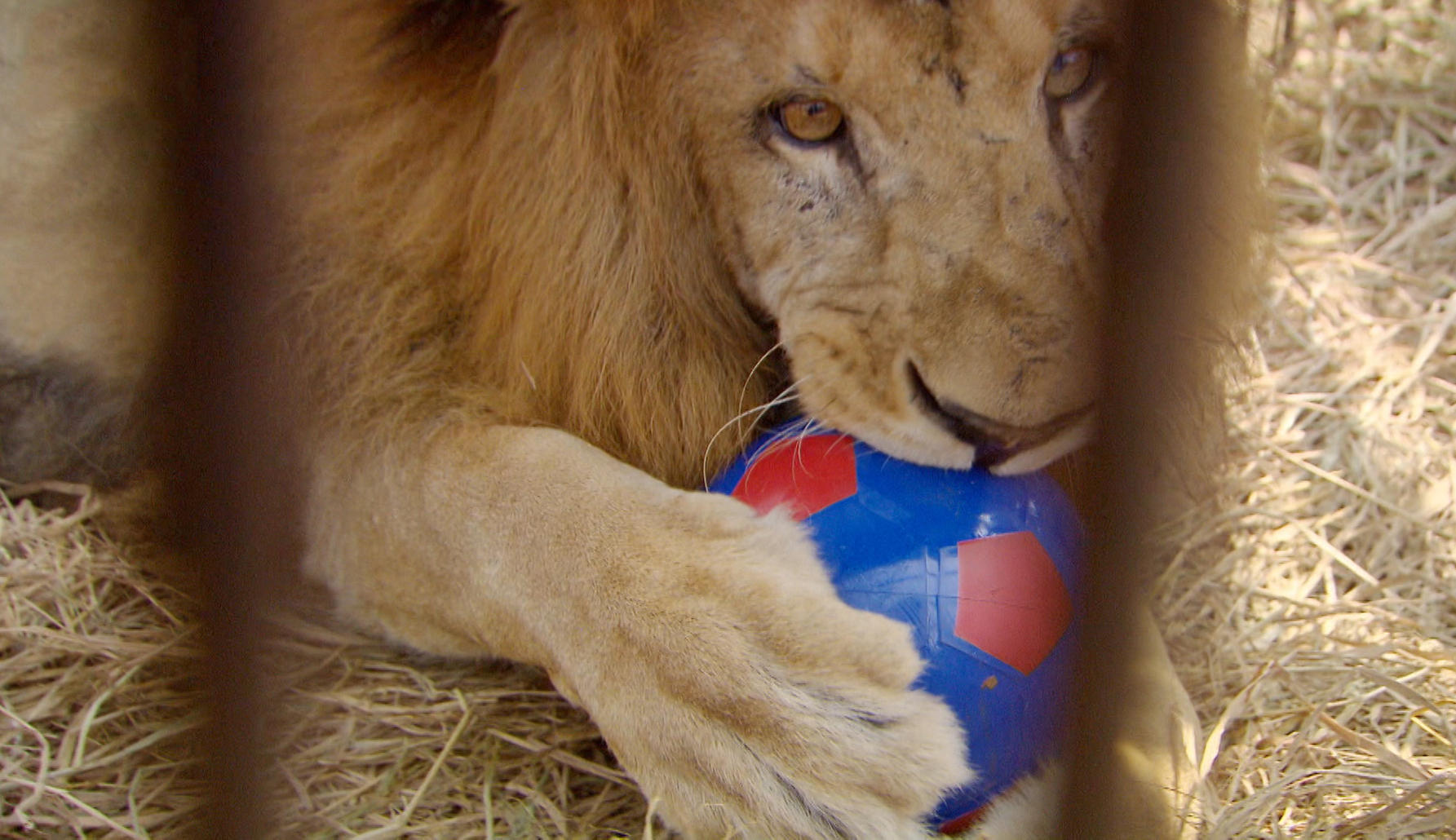 For 25 years, Jan Creamer and Tim Phillips have made it their mission to stop animal abuse in circuses. They caused a furor in their native England when they released video they'd secretly recorded of one of Britain's most prestigious trainers abusing circus animals. Prosecutors used their footage to convict the trainer of animal cruelty. Then, this relentless couple went global, sending teams to infiltrate circuses around the world to document the mistreatment of animals. Their work helped lead to local laws banning most wild animals from circuses in more than 15 U.S. states; and to national bans in more than 20 countries.

As we first reported in March, their latest successes have been across South America where they spent years recording animal cruelty on hidden cameras.  We caught up with Jan and Tim in Peru, along with two dozen lucky lions they'd recently rescued from traveling circuses.

*A warning: some of the pictures, later in this report, are disturbing.

These caged lions have never had it so good. They got to this temporary rescue center thanks to the unrelenting efforts of Jan Creamer and Tim Phillips and members of the organization they founded: Animal Defenders International.  Creamer and Phillips told us all 24 lions here had been repeatedly beaten in traveling circuses. The lions sounded like they wanted to tell us themselves.

This was the first time we had an interview interrupted by roaring.

Jan Creamer: This is their morning song--

Bill Whitaker: I do sound like that when I haven't had my coffee.

Jan and Tim rescue more than lions. They launched their South America campaign after seeing a chimpanzee, named Toto, chained outside a circus in Chile.

"Lots of our evidence has been used by prosecutors for cruelty convictions. Just one beating of an animal isn't going to secure a conviction.  You have to show a pattern of behavior."

Jan Creamer:  They'd smashed his teeth to punish him. They were stubbing cigarettes out on him.

Tim Phillips: Jan shot that picture. And he just gazed across at the Andes. It almost looked like he was looking mournfully at what he'd lost. We determined to rescue him. And we took him all the way home to Africa.

A judge appalled by Toto's treatment had given custody to Jan and Tim.

Jan Creamer: Our role is to take them from where they are, where they're suffering, put them where they need to be.

In South America, their team recorded this hidden camera footage of abuse, which is hard to watch.

Tim Phillips: What we did was we put a team undercover inside the South American circuses and they stayed there for almost two years just gathering evidence, filming, photographing.

Tim Phillips: And so, you're living in the heart of the circus. But that's how you get the really amazing evidence.

Many of their pictures were taken by undercover cameraman Alexis Diaz. When circus workers discovered what he was doing, they beat him up and broke his leg. Still he kept working to collect evidence.

Jan Creamer: Lots of our evidence has been used by prosecutors for cruelty convictions. Just one beating of an animal isn't going to secure a conviction.  You have to show a pattern of behavior.

Some circuses claim they train wild animals without abuse, using food and positive reinforcement.  But Creamer and Phillips insist beatings are routine because performing tricks is unnatural for wild animals. They only comply out of fear.

Tim Phillips: If you've got a dangerous animal, that means subjugation and so—

Jan Creamer:  Absolutely. It's all about control. And how they are going to make it do what they want it to do?  So it's a kick.  It's a punch.  It's a beating.

Tim Phillips: And really we've seen that everywhere we've gone. This is--

Tim Phillips:  Yeah.  In Europe.  In America.  In South America.  There are certain consistencies in the way that these circus animals are looked after.

Bill Whitaker:  So when you made this video evidence public, what was the reaction?

Tim Phillips: The reaction was instant.  I mean it really was just outrage. And then the politicians were starting to hear about it and say, "Well, we should probably have legislation here."

Bill Whitaker:  Bolivia was the first country in South America to ban wild animal acts. Other countries have followed suit?

But in Peru, the new law led to their next challenge: enforcement. Lion acts were outlawed, but local police were not equipped to pickup the lions or care of them.  So Jan and Tim said their organization would take in the lions. They brought police for protection during the seizures, because circuses resisted handing over their money makers.

Tim Phillips: Yeah. They threaten to release the animals into the streets and we try to—

Bill Whitaker:  Seriously? To let wild animals run through the streets if you come down hard on them?

When they raided the circus in Cusco, Peru, they rescued three lions.  But the circus refused to release its star attraction, a lion named Smith. The circus demanded police get another court order for Smith. While Jan and Tim worked on Smith had to keep performing.

Jan Creamer: He was unstable and upset because his family had been broken up, and then he was forced into the ring. That was not the time to put someone in the ring with him.

A grade school teacher volunteered to have Smith jump over her.  But Smith had other ideas.

Amazingly she jumped right up and was not badly hurt because he'd grabbed her by her collar. Some viewers wanted Smith killed, but Jan and Tim came back to save him. And after what Smith did to the teacher, the circus was forced to give him up.

Bill Whitaker: So have you seen a big difference in his behavior since he came here?

Bill Whitaker:  How was he before?

Bill Whitaker:  Why does he not have a mane?

Jan Creamer:  When you castrate the males they lose their mane.

Bill Whitaker:  Do you have a favorite?

Jan Creamer:  I do have a very soft spot for Leo.

Tim Phillips: The very first lion we rescued and loaded on this was an old lion called Leo. And he just looked broken. Every tooth had been smashed.  All of his canines. And he just looked like he'd given up. Within weeks, his coat was looking healthier. And he's just blossomed. He's like a real kitten again.

He too likes playing with soccer balls, but with few teeth…

Bill Whitaker:  He's the one who just gums it.

Each ball lasts a lot longer.

Rapunzel also has made a remarkable transition. Jan said when they came to take her from the circus, Rapunzel had never been out of her cage.

Jan said it took more than an hour to entice her out. Rapunzel was also afraid of hay because she'd never seen it.  But, as you can see, she's gotten over that.

Plenty of circuses like this one still are crisscrossing Peru, with lots of human acts to entertain.  But the government told us that, thanks to the efforts of Jan and Tim, there are no more wild animals -- not a single one -- still performing in Peru.

Lions that had been malnourished now get to feast on whole chickens. After plenty of food and medical attention, Jan and Tim found them a permanent home at a sanctuary in South Africa.  But that would mean a long flight from Peru.  And they'd have to coax two dozen skittish lions into travel crates in time for takeoff. Tim told us the transfers would be tricky and dangerous.

Tim Phillips: Might have a few problems. Worst case scenario is we have to anesthetize an animal to get them loaded in order to catch the flight. There can be problems with it.  The big lion anesthetic it does lead to seizures.

Jan Creamer: Come on people we don't have all night.

But then, one by one they lured the lions into their crates.

Bill Whitaker: That was easy. God he's a big fella.

Several objected to the smaller space.

Jan Creamer: OK, this one needs to be moved.

Bill Whitaker: This is going quite well.

Smith, who had dragged the teacher, also seemed ready to leave.

Finally, the last lion was reluctant Rapunzel. Remember, during her rescue it took more than an hour to get her to leave her circus cage? Once again, she refused to leave the known for the unknown. With time running out, they had to tranquilize her.

Jan Creamer: This is the scariest thing we have to do with an animal. But we had no choice but to do it. She wasn't settling down.

Fearing she could suffer a seizure, they quickly gave Rapunzel the antidote. And hoped they'd given it to her in time.

Tim Phillips: She should be OK now.

Jan Creamer: The cages. The cages are empty. They really are. That feels good.

The drive to the airport began what would be a two-day journey. Jan, Tim, and a vet flew with the lions, without incident.

Then, in South Africa, we caught up with them being transported through the countryside, after what had been the biggest lion airlift in history. Thirty-three lions including nine rescued from Colombia.

Tim Phillips: Seeing these animals when you've taken them to as close as we can give them to freedom really is what it's all about.

The lions are still fenced in, but they have plenty of room to roam -- more than 30 acres.  These cats couldn't survive in the wild. Most don't have claws, and their teeth have been smashed.  Here, they'll get fed and they can bask in a world of new experiences -- many had never stepped on grass, had never touched a tree. Life's simple pleasures; long denied.

Since our story first aired, despite having armed guards to protect the lions, two of the rescued lions were poisoned and killed in their South African sanctuary by poachers.  Animal Defenders International called the killings "evil and cowardly." They are working to increase security.

To learn more about Animal Defenders International and how you can help, visit their website

Coexisting with grizzlies in Montana