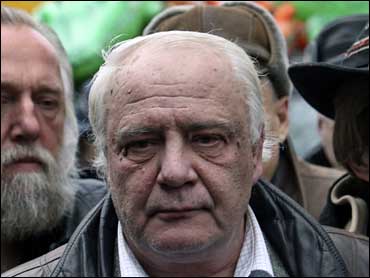 Several hundred supporters gathered Sunday to nominate Soviet-era dissident Vladimir Bukovsky to run for president in March's election, but official residency requirements will make it hard for him to qualify for the race.

Bukovsky, 64, who lives in Britain, has voiced hope that his experience resisting the KGB in the 1960s and 1970s could help galvanize the nation's fractured liberal opposition groups.

About 800 supporters gathered in Moscow's Sakharov Museum to put Bukovsky forward as a candidate to run in the March 2 vote. They are expected to submit the nomination documents to the Central Election Commission on Monday.

Bukovsky, however, is unlikely to be allowed to run because he fails to meet a 10-year Russian residency requirement and holds British citizenship.

President Vladimir Putin, who is barred from seeking a third straight term, on Monday backed his protege Dmitry Medvedev in the presidential race. The endorsement virtually assures Medvedev's victory, given Putin's popularity and the Kremlin's powerful influence over the political system and the broadcast media.

A 42-year-old former law professor, with no known ties to the KGB, Medvedev has been chairman of Russia's giant natural gas monopoly, and he's been a deputy prime minister - though he's never run for office before, reports CBS News correspondent Richard Roth.

Under Putin, a former KGB officer, the security services have regained much of their Soviet-era influence and many of the democratic gains of the 1990s have been reversed.

Garry Kasparov, the former chess champion who has become a vocal Putin opponent, said Thursday that his presidential bid fell apart because supporters were prevented from renting a meeting hall to nominate him - part of what he characterized as a Kremlin campaign to snuff out any real opposition.

Grigory Yavlinsky, the head of liberal Yabloko party who participated in previous presidential elections, also said he wouldn't run. Yabloko said its supporters would vote for Bukovsky if he gets registered.

Known for his revelations about the Soviet practice of forced psychiatric treatment of dissidents, Bukovsky spent a total of nearly 12 years in Soviet mental hospitals and jails before international pressure came to bear. In 1976, he was bundled out of the country in handcuffs and swapped for Chilean Communist Louis Corvalan.

Bukovsky is a neurophysiologist with degrees from Cambridge University in Britain and Stanford University in California, and the author of several books.