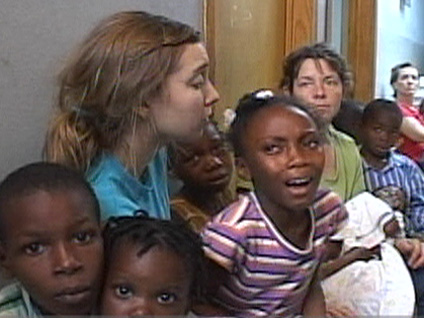 A U.S. aircraft fired on a house in the desert near the Syrian border Wednesday, and Iraqi officials said more than 40 people were killed, including children. The U.S. military said the target was a suspected safehouse for foreign fighters from Syria, but Iraqis said a helicopter had attacked a wedding party.

Associated Press Television News footage showed a truck containing bloodied bodies, many wrapped in blankets, piled one atop the other. Several were children, one of whom was decapitated. The body of a girl who appeared to be less than 5 years of age lay in a white sheet, her legs riddled with wounds and her dress soaked in blood.

The attack happened about 2:45 a.m. in a desert region near the border with Syria and Jordan, according to Lt. Col. Ziyad al-Jbouri, deputy police chief of Ramadi, the provincial capital about 250 miles to the east. He said 42 to 45 people died, including 15 children and 10 women. Dr. Salah al-Ani, who works at a hospital in Ramadi, put the death toll at 45.

The area, a desolate region populated only by shepherds, is popular with smugglers, including weapons smugglers, and the U.S. military suspects militants use it as a route to slip in from Syria to fight the Americans. It is under constant surveillance by American forces.

In a statement, the U.S. Central Command said coalition forces conducted a military operation at 3 a.m. against a "suspected foreign fighter safe house" in the open desert, about 50 miles southwest of Husaybah and 15 miles from the Syrian border.

The coalition troops came under hostile fire and "close air support was provided," the statement said. The troops recovered weapons, Iraqi and Syrian currency, some passports and some satellite communications gear, it said.

APTN video footage showed mourners with shovels digging graves over a wide dusty area in Ramadi, the provincial capital where bodies of the dead had been taken to obtain death certificates. A group of men crouched and wept around one coffin.

Iraqis interviewed on the videotape said revelers had fired volleys of gunfire into the air in a traditional wedding celebration before the attack took place. American troops have sometimes mistaken celebratory gunfire for hostile fire.