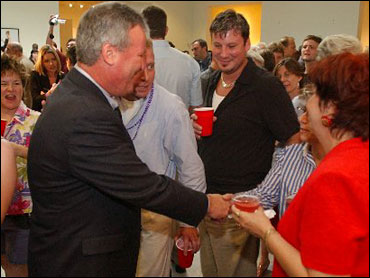 A federal judge Thursday refused to lift the no-fly zone over Walt Disney World so that an anti-homosexuality group could fly banners over the amusement park during the annual Gay Days celebration.

The Family Policy Network had wanted to fly banners reading "JESUS CHRIST: HOPE FOR HOMOSEXUALS.COM" during the 13th annual celebration, which began Thursday. The four-day event, which is not sponsored by Disney, is expected to draw more than 100,000 gays.

The Virginia-based network sued the Federal Aviation Administration and other federal agencies, saying the anti-terrorism flight restrictions - approved by Congress in February - violated its free-speech rights.

Planes must remain at least 3,000 feet above the park or stay at least 3.3 miles away. The rules also cover Disneyland in Anaheim, Calif.

During the hour-long hearing, Justice Department attorney Brian Kennedy argued that the First Amendment had little to do with it.

U.S. District Judge Anne Conway said that she did not believe she had jurisdiction over FAA policies, and that the network did not meet the burden of proof.

Disney has said it wants the no-fly zone maintained, but Gay Days organizers sided with the Family Policy Network.

"I don't believe the no-fly zone should be there," Chris Alexander-Manley, Gay Days director of marketing, told the Orlando Sentinel. "There was one group that was planning to fly a banner welcoming everybody."