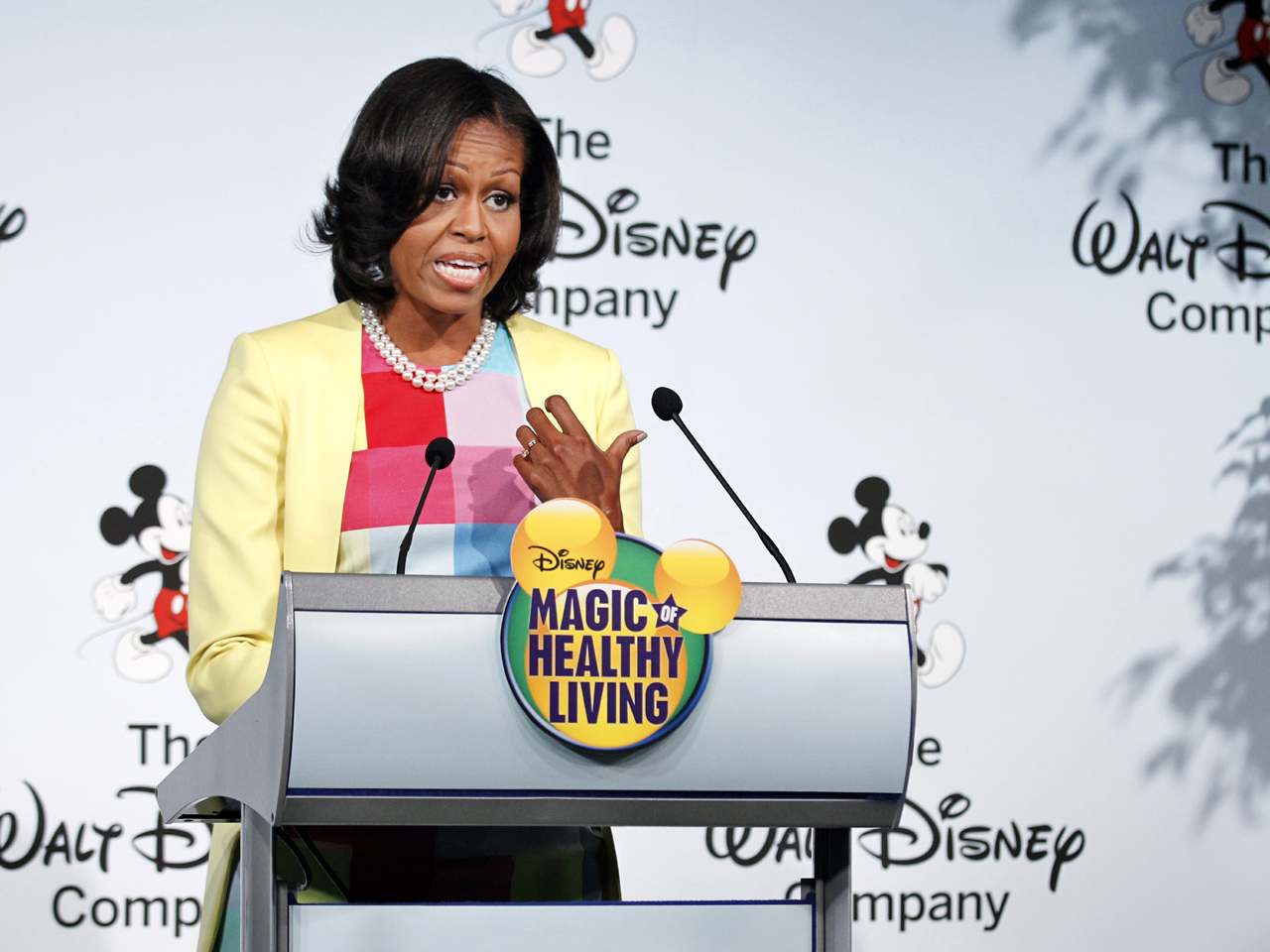 (CBS News) Mickey Mouse and the Disney family want their fans to grow up to be healthy adults, and are stepping up their fight against childhood obesity.

The Walt Disney Company announced on Tuesday that it will be enacting several new regulations in order to promote healthy eating habits. The company detailed the plan during a Washington news conference with Michelle Obama, who has focused on fighting childhood obesity during her tenure as First Lady.

Part of the new regulations include:

"We're proud of the impact we've had over the last six years," Robert A. Iger, Chairman and CEO of The Walt Disney Company, said in a press release. "We've taken steps across our company to support better choices for families, and now we're taking the next important step forward by setting new food advertising standards for kids. The emotional connection kids have to our characters and stories gives us a unique opportunity to continue to inspire and encourage them to lead healthier lives."

The ad restrictions will be enforced for any programming on a Disney platform that is intended for children 12 and under, and won't go into effect until 2015 because of existing advertising agreements, the Washington Post reports. The nutritional standards are aligned with federal standards, promote fruit and vegetable consumption and call for limiting calories and call for reducing saturated fat, sodium and sugar. This means ads for popular children's food items like Capri Sun, Lunchables and sugared cereals will not be allowed on the networks, according to the New York Times.

However, this also means that while the worst junk food will be weeded out, some not fully nutritious food items marked as "better-for you" versions of products will still make it in the mix. "There are still going to be SpaghettiOs and things like that in the mix," Margo Wootan, director of nutrition policy for the Center for Science in the Public Interest, cautioned to USA Today. She added that while the initiative is commendable, some of the regulations -- for example, including foods with less than 10 grams of sugar in a serving -- will allow items like three Chips Ahoy cookies to pass the criteria.

Also, Dr. Kelly Brownell, director of the Rudd Center for Food Policy and Obesity at Yale University, told the New York Times that people are getting fatigued with all these nutritional approval ratings on their food and may not really pay attention to the Mickey Checks. "Here comes Disney with yet another symbol, and it's too early to say whether this will simply add to the chaos and confusion or actually help steer parents and kids as they shop," Brownell said.

Still, it's an important issue to promote. Childhood obesity has tripled in the last 30 years, according to the Centers of Disease Control and Prevention. As of 2008, one third of children were either overweight or obese. Kids who are obese, even at as young as 2, were more likely to be obese as adults.

The New York Times reported that Disney acknowledged that it would lose an undisclosed amount of revenue, but they believed that promoting a healthy lifestyle was worth all the negatives. Currently, only promotions and sponsorships -- not traditional ads -- are allowed on Disney Channel. Other channels, like Disney XD, use commercials.

The company previously launched the Disney Magic of Healthy Living initiative in Sept. 30, 2010, which continued their 2006 promise to help the nation make kids healthier. Disney previously enforced nutritional guidelines associated with Disney brands and characters and hosted a "TRY-athlon," to get kids to try new foods and exercises. But, this marks the first time a media company makes this strong of a move towards promoting healthy foods.

"With this new initiative, Disney is doing what no major media company has ever done before in the U.S. -- and what I hope every company will do going forward. When it comes to the ads they show and the food they sell, they are asking themselves one simple question: 'Is this good for our kids?'"Michelle Obama said in a statement.

"This is landmark, because a major media company is taking responsibility for what food they advertise to children," Wootan said to USA Today. "This should be a real wake-up call to Nickelodeon and the Cartoon Network to do the same."