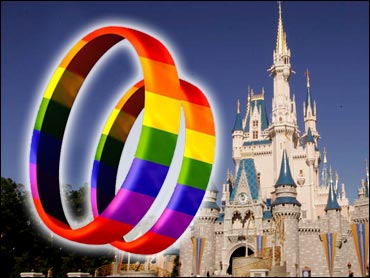 Same-sex couples who want to exchange vows in front of Cinderella's Castle now have the chance.

The Walt Disney Co. had limited its Fairy Tale Wedding program to couples with valid marriage licenses, but it is now making ceremonies at its parks available to gay couples as well.

"We believe this change is consistent with Disney's long-standing policy of welcoming every guest in an inclusive environment," Disney Parks and Resorts spokesman Donn Walker said Friday. "We want everyone who comes to celebrate a special occasion at Disney to feel welcome and respected."

The company said it made the change after being contacted by a gay couple who wanted to use the wedding service, which offers ceremonies at Disneyland in California, Walt Disney World Resort in Florida and Disney's cruise ships.

The service offers flowers, dining, music and many optional Disney touches, from ceremonies in front of the parks' iconic attractions to having Mickey and Minnie Mouse in formal wear as guests. The packages start at $8,000 and can cost more than $45,000.

Groups not affiliated with Disney have held annual "gay days" celebrations at Disney parks for years. Company officials have taken a tolerant attitude to the weekend, allowing party promoters to rent out parks after hours and rebuffing religious groups that condemned Disney.

In 2005, Southern Baptists ended an eight-year boycott of the Walt Disney Co. for violating "moral righteousness and traditional family values."