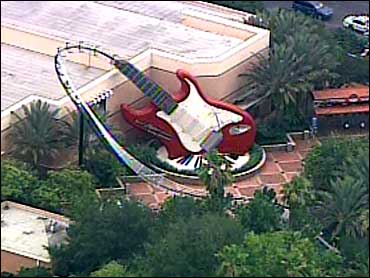 The 12-year-old boy who died after riding a Walt Disney World roller coaster had a congenital heart defect, an autopsy found Friday, and an inspection of the ride found no mechanical problems.

The autopsy of Michael Russell, the son of an Iraq war veteran, was done one day after he stopped breathing while riding Disney-MGM's Rock 'n' Roller Coaster. The cause of death was left pending until more tests are conducted, ruled Dr. Sara H. Irrgang, an Orange County associate medical examiner.

"No evidence of injury was found, but congenital heart abnormalities were detected, which will be further evaluated," the office said in a statement.

Meanwhile, state inspectors have examined the ride and found nothing unusual, so it's been reopened, CBS Radio News correspondent Peter King reports. A Disney Web site description of the ride says: "Zoom from 0-60 mph with the force of a supersonic F-14, take in high-speed loops and turns synchronized to a specially recorded Aerosmith soundtrack."

"Walt Disney World engineers and ride system experts completed a thorough inspection of the attraction overnight and found it to be operating properly," the company said in a statement.

The boy was limp when the ride ended. His father, Byron Russell, immediately attempted CPR but the boy died at a hospital.

Russell told authorities his son had no previous health problems, according to the Orange County Sheriff's Office.

Byron Russell is a part of the 5th Special Forces Group (Airborne) based at Fort Campbell, Ky., and served in Iraq, the military has said.

A medical study released last year gave support to the notion that heart problems can be triggered or aggravated by roller coasters.

Researchers at the University Hospital of Mannheim in Germany put 55 healthy people on roller coasters and monitored their heart rates during the two-minute experience. Average heart rates rose from 89 beats per minute before the ride to 155 just afterward.

These rates are high enough to trigger rhythm problems, and two participants experienced different types of them. The study's authors recommended that people with heart disease not ride coasters.

Disney and other large amusement parks are exempt from state and federal oversight, but the parks in Florida agreed in 2001 to provide quarterly accident reports and notify the state of serious incidents. Disney has reported nine deaths since then; Universal Orlando has reported two and Sea World and Bush Gardens none.

The Rock 'n' Roller Coaster debuted in 1999 and has had 36.6 million riders, according to Disney. No previous fatalities have been reported on the ride.