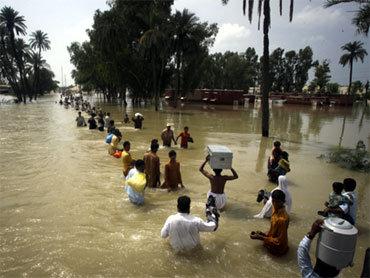 Fever and diarrhea are spreading among victims of the worst flooding in Pakistan in decades, officials said Friday amid warnings that storm waters were again surging south along swollen rivers, threatening more destruction.

The floods have affected 14 million people and about a quarter of the country, overwhelming an already weak government coping with crushing economic conditions and attacks by al Qaeda and Taliban militants. Around 1,500 people have been killed since the torrents began more than two weeks ago.

"The crisis facing Pakistan is not only enormous, it's still unfolding," U.N. refugee agency spokesman Adrian Edwards said. "There continues to be massive destruction as the bloated rivers flow southwards across the plains and the crisis in our view will not be over when the flooding recedes."

CBS News' Farhan Bokhari reports that U.N. Secretary-General Ban Ki-moon is scheduled to arrive in Pakistan on Saturday to survey the crisis relief efforts. Sen. John Kerry, the chairman of the Senate Foreign Relations Committee, is due to arrive next Wednesday.

Spokesman Maurizio Giuliano said U.N. officials roughly estimated that up to one-fourth of the country is or had been affected by the floods, though those areas were not necessarily under water.

In the Multan area of Punjab province, large parts of which have been under water for days, medical workers have seen at least 1,000 children with illnesses such as gastroenteritis in the last three days, said Mumtaz Hussain, a doctor at the main government hospital.

"The situation is alarming as the diseases can infect other survivors," Hussain said.

The global aid response to the Pakistan floods has so far been much less generous than to other recent natural disasters - despite the soaring numbers of people affected and the prospect of more economic ruin in a country key to the fight against Islamist extremists.

Reasons include the relatively low death toll of 1,500, the slow onset of the flooding compared with more immediate and dramatic earthquakes or tsunamis, and a global "donor fatigue" - or at least a Pakistan fatigue.

Going by the numbers of people affected, the disaster is worse than the 2004 Indian Ocean tsunami, the 2005 Kashmir earthquake and the 2010 Haiti earthquake combined, the U.N. says. But international aid for those disasters came at a more rapid pace, aid experts say.

Ten days after the Kashmir quake, donors gave or pledged $292 million, according to the aid group Oxfam. The Jan. 12 disaster in Haiti led to pledges nearing $1 billion within the first 10 days.

For Pakistan, the international community has given or pledged about $102 million since the flooding began in earnest in late July, U.N. figures show.