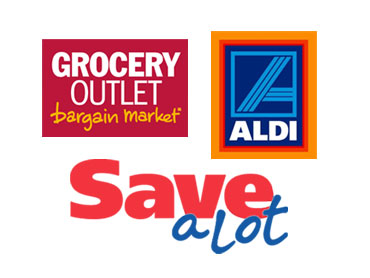 Tough financial times have sent shoppers looking to fill their grocery carts for less. And the rapidly-expanding discount grocery store industry has reaped the benefits, offering big discounts on many of the foods families are familiar with.

"Early Show" Consumer Correspondent Susan Koeppen did some comparison shopping and said Tuesday, "What we found is that these stores do have a lot to offer, from fresh fruits and veggies to canned goods at a fraction of the price. And we found shoppers who range from those who need to save money to those who simply want to."

For the savvy supermarket shopper, she points out, saving money on food doesn't mean coupons or sales at major chains. Instead, "They're flocking to a growing list of discount grocery stores popping up around the country."

Phil Lempert, of , tells Koeppen, "Over the last few years, the biggest impact that we've had in food retailing has to do with three major chains: Grocery Outlet, Save-a-Lot and Aldi.

At the Save-a-Lot in Duquesne, Pa., near Pittsburgh, Koeppen found no-frills shopping. Customers bag their own groceries. The store is small. And brand name items are few and far between, But, says Koeppen, all of that equals big discounts for shoppers.

One told Koeppen the store appeals to her because, "Money's really tight, and it goes a lot further here."

That Save-a-Lot may not have a fancy bakery or deli counter, Koeppen observed, but the discount store does have items like canned vegetables for just 49 cents.

The store's owner, John Kawecki, told Koeppen customers "can save up to 40 percent compared to a traditional grocery store."

Those savings are luring more customers to the discounters, Koeppen notes. Save-a-Lot, with 1,200 stores in 39 states, plans to double the company's size over the next five years. Grocery Outlet, based on the West Coast, is adding 15 stores this year. And Aldi, with more than 1,100 stores in 30 states, intends to add more than 80 stores in 2011.

"People really have gotten very frustrated going into supermarkets … loaded with 50,000 items," says Supermarketguru's Lempert. … These stores, on average, are about a third or a quarter of the size. So you are able to get in the store, find what you want faster, and get out."

Save- a-Lot and Aldi, says Koeppen, are able to keep prices low, in part, by selling private label brands, meaning brands in their name specific to those stores. And about 70 percent of the food at Grocery Outlet is discontinued goods -- still fresh, but perhaps the label has changed a little, so Grocery Outlet can sell it on the cheap.

To illustrate her point, Koeppen got Cinnamon Chex cereal from a major supermarket chain in Manhattan for $4.49. At Save-a-Lot, it cost $2.79. Pringles cost $2.49 at the big chain, $1.29 at Aldi. And she bought Ben & Jerry's ice cream at the major supermarket for $5.49 that ran her -- $1.49 at Grocery Outlet perhaps, she said, because the label had changed.