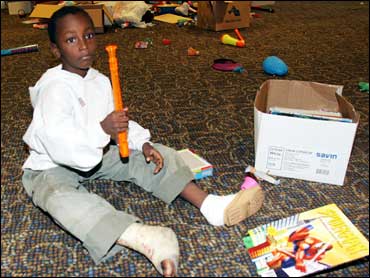 WebMD Medical Editor Brunilda Nazario, MD, spent three days at shelters in the Atlanta area - and was shocked at the inadequate resources. America is not prepared for disaster, she says.


I'm not associated with the Red Cross. But when evacuees began pouring into the Atlanta area, I volunteered to see patients at a temporary Red Cross shelter set up just south of Atlanta.

At that time there were no doctors at the center to see the patients; this was only the first stage for many of the arrivals here. Many evacuees were elderly and had special needs; they left their homes prior to the hurricane with the expectation of returning soon.

Sharing my experience in the aftermath of Katrina may highlight glaring examples of a serious lack of preparedness in this country.

Many basic first aid supplies, such as over-the-counter disinfectants for superficial wounds and scrapes, a container for needle disposal, and accessible telephone lines were unavailable. In one makeshift shelter, televisions, radios, and newspapers weren't available to help keep the victims informed about the disaster. While the rest of the world stayed glued to the media coverage of the disaster, the victims themselves were left with questions about what was going on.

Despite the power of medical advances in this country, we did not have sufficient medical manpower mobilized to handle this major natural disaster.

As the days passed, a very different group of individuals were being seen in the shelter; a local hospital facilitated medical care during day hours. Nighttime hours, however, were without medical care.

Stories of individuals caught in the hurricane were heard everywhere. Bruises, blisters, scrapes, and extreme emotional and physical fatigue were surfacing.

People were now coming from New Orleans and Mississippi, and different emotions were beginning to emerge - denial (as a way to deal with this reality) and anger directed at the staff were reactions being expressed. Elderly victims expressed confusion, teens revealed depression, and parents attempted to provide reassurance with few social resources to help them.

The lack of this country's preparedness is completely unacceptable.

I also want to share stories of people I met at the shelters - especially one New Orleans nurse who braved the rising waters in a children's hospital before driving hours and hours to Atlanta. In her, I saw the mental distress we will find in many more survivors. She made it through the storm but now must deal with a painful replay of memories.

When I showed up at the refugee center on Sept. 1, there was a lot of chaos outside as well as inside the facility. There were probably 800 refugees at that center. The parking lot was jam-packed, and the outpouring of donations was more than the facility staff could handle. People were milling around.

People were dropping off lots of donations; there were clothes bags, food, and water even on the sidewalk outside. No one could identify who escaped the disaster and who was there to volunteer.

Some people from the nearby neighborhoods were walking in and taking the donations. The situation not only was chaotic, it was dangerous. Officers and security initially were nowhere to be seen. No single team was set up to control or coordinate this effort.

The positive aspects of this shelter: There were several televisions, which allowed people to congregate - to watch the coverage, and talk about their experiences. The sleeping area and cots were grouped together to form little communities. I think it helped people feel more comfortable.

There was a nurse's office that was an adequate size to see patients. But one big problem surfaced quickly - there was no phone jack. We had many elderly people who had run out of medications and needed new prescriptions called in, but we had no phone! We had my cell phone, but my battery was pretty drained.

One patient had a history of seizures from a previous gunshot wound to the head; he hadn't taken medication for several days. The problem with seizure medications is that you have to maintain a certain blood level, so not having taken his medications for a few days made him a high-risk patient that the medical personnel needed to be aware of. He was awaiting the arrival of his medications, which would take a few days.

A second high-risk patient had diabetes. She also had open heart surgery just a week before I saw her. She didn't have her insurance papers, so we couldn't get insulin for her. But she came with relatives, so she was sharing some of their insulin. Her surgical incision was clean but oozing. The stress of the disaster situation and her lack of insulin would increase the risk of infection to her wound. The shelter's initial first aid kit had no form of antiseptic - no betadine, no iodine, no hydrogen peroxide. I was shocked and angry at this lack of basic first aid supplies. It is completely unacceptable.

Over the next two days, we began seeing those who weathered the storm but were able to get out of New Orleans. A mother said she had just started walking with her children. They had minor bruises, cuts, scrapes, foot blisters, and sores, as well as fungal skin infections and rashes from walking in the dirty water.

These were fairly healthy people, with no acute medical crises. But we were beginning to see significant psychological stress. I saw the most significant case of posttraumatic stress disorder (PTSD) in a nurse who had been working at the children's hospital. She went through the whole storm, seeing patients, seeing the water rising, hearing the rioting, and had been scared for her life.

She and her family had planned to spend Labor Day weekend in Atlanta with her father. They knew the storm was coming, and her husband took the kids and headed for Atlanta. She was to follow later. At the last minute, they switched cars - she got the larger car, which she didn't want because it was harder to park. She had $12 in her purse when she left the house that morning.

She and her co-workers (and patients) rode out the storm. They were lucky, she said. They had a lot of generators there, plenty of water, plenty of food - although it certainly wasn't good-tasting food. She had a pretty good sense of humor as she started the story. But as she continued, and the memories replayed the trauma in her mind, she broke down. Her eyes showed despair, and she shook uncontrollably as she recounted her story of survival. She was getting into a traumatic state - really reliving everything that happened, all her fears.

There were a couple of kids they had to airlift out, but there was nowhere for the helicopters to land. The hospital staff cut down a few bamboo trees around the hospital to help stabilize the ground and created a stable walkway. They got a child with cerebral palsy onto a gurney and down the bamboo pathway to where the helicopter could pick him up and transfer the child to a safe care facility.

In their nursing unit, the staff felt safe. They were listening to the news, to the warnings of armed looters. Anytime they went into the hall, they had no idea who was there, she told me. At one point, she and her co-workers were told they had to evacuate. They pooled their money together - $7 from one, $3 from another; she had $12. Luckily, she discovered, she also had a full tank of gas in that big car.

As they drove off, a man approached the car. They just froze and didn't know if he was going to hijack the car or what. She was in mission mode, and kept driving, kept driving, kept driving. She said it was a quiet ride up to Atlanta. They made one stop on the way up, at an IHOP or something. Someone overheard them talking and said she wanted to pray with them.

When she arrived in Atlanta, she ate some macaroni and cheese, probably the most unhealthy thing you can eat. But she had been so tired of eating Jell-O and the hospital food. The comfort food tasted really good to her.

Within a couple of days, this New Orleans nurse and the other refugees had to be transferred to a different shelter - a sports dome at Georgia Tech University in downtown Atlanta. That change stirred up real problems. The Georgia Tech volunteers initially looked at this strictly as a shelter and would not allow the same services to be given to the victims, including medical services.

The facility itself was the worst set-up for these people, most of whom were elderly. They had to go down steep stairs into the playing field, where cots were set up barracks-style. These cots were very low to the ground - just a few inches off the ground. I could see instantly that elderly people would have a hard time lying down on them and getting back up. They could easily trip and fall on these cots, because they were set so close together.

Eventually they took some of the better cots from a shelter at the natatorium, but it took some convincing. Even though it had been chaotic in the natatorium, at least it felt more like a home and we were allowed to handle medical problems.

Also, many of the volunteer staff did not understand the emotional state that occurs when a disaster of this nature occurs. There are stages you expect people to go through. The first stage is usually denial. These people were still in shock. The next stage is anger. If you're a volunteer, you have to be prepared for people to be angry at you. It's not that they're angry at you - they're angry at the situation. You have to accept that and let them vent, because it's part of the healing process.

The evacuees were told they had to shut off TVs at 11 p.m., that they had to go to bed. One woman said, "I'm not turning off that TV. I lost five children." She, like the others, was feeling anger, shock, and was beginning to realize what had happened. You could see it on their faces: "Now have nothing - yet this is what's being done to us."

I visited another shelter later on - a camp with buildings for housing 400 people. This shelter was staffed with a few nurses, a psychiatrist, a pediatric doctor, and a primary care doctor. The next day, a cardiologist was there. That shelter was the best-prepared from an organizational standpoint.

My bottom-line message is this: This country is not prepared. We don't have enough medical personnel to help people in a major disaster. Even when doctors try to help, there is no one in charge to facilitate the process. We need to roll up our sleeves and do what needs to be done.

Brunilda Nazario, MD, is a medical editor for WebMD. Her opinions and conclusions are her own.