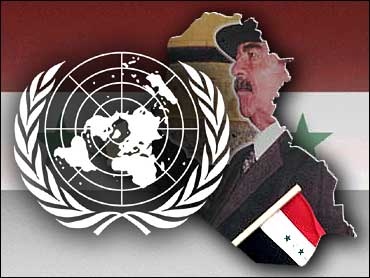 At the White House, President Bush quickly reinforced the U.N. action by threatening Saddam with "the severest consequences" if he fails to eliminate any nuclear, chemical and biological weapons programs.

"The outcome of the current crisis is already determined. The full disarmament of weapons of mass destruction will occur. The only question for the Iraqi regime is to decide how," he said. "His cooperation must be prompt and unconditional or he will face severest consequences."

"The United States prefers that Iraq meet its obligations voluntarily, yet we are prepared for the alternative," Mr. Bush said. "In either case, the just demands of the world will be met."

The U.N, vote on resolution No. 1441 came after eight weeks of tumultuous negotiations and was seen as a victory for the United States, which drafted the document together with Britain.

Now, as CBS News Chief White House Correspondent John Roberts reports, the clock starts ticking on Saddam Hussein. Saddam now has until Nov. 15 to accept the resolution and to comply. And by December 8th, Iraq must provide a "full, accurate and complete" declaration of all its weapons of mass destruction

Chief U.N. weapons inspector, Hans Blix, said an advance team of inspectors will arrive in Baghdad on Nov. 18 after a nearly four-year absence. He said the unanimous council vote "strengthens our mandate very much." Inspectors would have up to 45 days to actually begin work, and must report to the council 60 days later on Iraq's performance.

The unanimous vote came as a surprise with support even from Syria, Iraq's neighbor, and Russia whose yes vote was not known until the last moment.

Iraq said it would review the resolution before deciding whether to accept the plan, said Iraq's U.N. ambassador.

"Iraq will certainly study the resolution and decide whether we can accept it or not," Iraqi Ambassador Mohammed Al-Douri said moments after the resolution was unanimously approved.

Al-Douri also said he was surprised by Syria's support for the resolution but said Baghdad would not hold it against Damascus.

"I don't blame anyone. We respect and understand all the votes," he said, hinting that Iraq had also held out hope for a Russian abstention which never came.

British Prime Minister Tony Blair, who had worked closely with the United States in preparing the tougher new stance, warned Saddam he will face military action if he fails to comply.

"Defy the U.N.'s will and we will disarm you by force," Blair told reporters at his 10 Downing St. office. "Be in no doubt whatever over that." But Blair said the resolution would not necessarily bring war. "Conflict is not inevitable, but disarmament is," he said.

Secretary General Kofi Annan said Baghdad should comply for the sake of the Iraqi people.

"Iraq has a new opportunity to comply with all these relevant resolutions of the Security Council. I urge the Iraqi leadership for the sake of its own people...to seize this opportunity and thereby begin to end the isolation and suffering of the Iraqi people."

Germany, which had opposed unilateral U.S. military action against Saddam and becomes a council member in January, said the Iraqi leader now could have no doubt about the future of his weapons program.

"The resolution is a clear signal to Baghdad: Saddam Hussein must realize what serious consequences the non-observance of the resolution would entail," Foreign Minister Joschka Fischer said in a statement.

Russia, which forced reworking of the U.S. draft of the resolution throughout the deliberations, said it was satisfied the resolution will not, in and of itself, spark military action.

"What is most important is that the resolution deflects the direct threat of war" and opens the road to "a political diplomatic settlement," said Russia's U.N. Ambassador Sergey Lavrov. Russia has been Iraq's strongest council ally and said Friday that wording in the resolution still was not ideal.

For weeks Syria insisted no new resolution was necessary. But after intense lobbying, particularly by France, Syria said Thursday for the first time it could accept the resolution if Damascus' proposals were included.

Syria's deputy U.N. Ambassador Fayssal Mekdad said Damascus voted "yes" after receiving assurances from key nations "that this resolution would not be used as a pretext to strike Iraq." The resolution "reaffirms the central role of the Security Council" and Iraq's sovereignty, both key issues for Syria, he said.

In remarks after the vote, U.S. Ambassador John Negroponte said, "This resolution is designed to test Iraq's intentions."

The broad support sends a strong message to Baghdad that the Security Council — divided for years over Iraq — expects full compliance with all U.N. resolutions.

A breakthrough in negotiations came Thursday when France and the United States reached a critical agreement to address French concerns that the resolution could automatically trigger an attack on Iraq.

"This resolution is a success for the Security Council and the United Nations," said France's U.N. Ambassador Jean-David Levitte. "This success must now become a success for peace."

But Iraq "must understand that this opportunity is the final one," he said.

U.S. Ambassador John Negroponte said there are "no hidden triggers" for the automatic use of force against Iraq if it does not comply with the resolution. He emphasized that should the inspectors report Iraqi violations, the matter would return to the Security Council and if it does not act, the United States would.

"To the government of Iraq our message is simple: non-compliance is no longer an option," he said.

At French and Russian insistence the Security Council would then meet to discuss any reported Iraqi violation. At that stage, the Council would consider further action. However, the resolution says nothing that would forbid the United States from attacking at that point.

As a "carrot" to Iraq, the resolution gives Saddam "a final opportunity" to cooperate with weapons inspectors, holds out the possibility of lifting 12-year-old sanctions imposed after Iraq's 1990 invasion of Kuwait, and reaffirms the country's sovereignty.

Washington and London spent eight weeks trying to get all 15 Security Council members to approve the resolution to send a united message to Saddam.

The United States had tweaked its draft several times to account for French and Russian concerns over hidden triggers that could automatically launch an attack on Iraq.

In a key provision that would declare Iraq in "material breach" of its U.N. obligations, the United States changed wording that would have let Washington determine on its own whether Iraq had committed an infraction.

Iraqi state media called the draft resolution a pretext for war and urged the Security Council Thursday not to bow to American demands.

"America wants to use this resolution as a pretext and a cover for its aggression on Iraq and the whole Arab nation," the ruling Baath Party newspaper Al-Thawra said Thursday.

According to a strict timeline in the resolution, Iraq would have seven days to accept the resolution's terms and 30 days to declare all its chemical, biological and nuclear programs. Blix, the chief weapons inspector, said Iraq might have difficulty making a declaration of its large petrochemical industry in that time, but the United States decided against giving Baghdad more time.