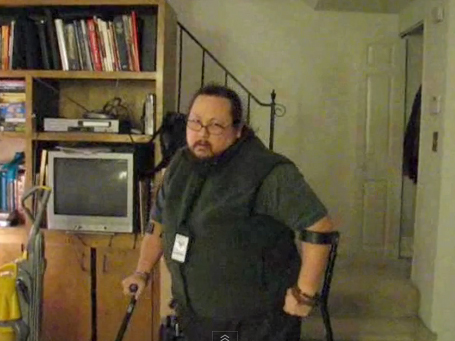 (CBS News) This is one of those videos you will watch and just be amazed at the power of the human spirit. Watch as a disabled 47-year-old veteran overcomes all odds to walk again and transforms himself in ways you can't even begin to imagine.

I... I was chopping some onions and think I might have a little something in my eye right now. Yeah... the onions.  The inspiring video was posted by YouTube user Dallapage who writes:

Arthur Boorman was a disabled veteran of the Gulf War for 15 years, and was told by his doctors that he would never be able to walk on his own, ever again. He stumbled upon an article about Diamond Dallas Page doing Yoga and decided to give it a try -- he couldn't do traditional, higher impact exercise, so he tried DDP YOGA and sent an email to Dallas telling him his story.

Dallas was so moved by his story, he began emailing and speaking on the phone with Arthur throughout his journey - he encouraged Arthur to keep going and to believe that anything was possible. Even though doctors told him walking would never happen, Arthur was persistent. He fell many times, but kept going.

Arthur was getting stronger rapidly, and he was losing weight at an incredible rate! Because of DDP's specialized workout, he gained tremendous balance and flexibility -- which gave him hope that maybe someday, he'd be able to walk again.

His story is proof, that we cannot place limits on what we are capable of doing, because we often do not know our own potential. Neither Arthur, nor Dallas knew what he would go on to accomplish, but this video speaks for itself. In less than a year, Arthur completely transformed his life. If only he had known what he was capable of, 15 years earlier.

Do not waste any time thinking you are stuck - you can take control over your life, and change it faster than you might think. Hopefully this story can inspire you to follow your dreams - whatever they may be.

Now like anything that hits the web, I'm going to caution people take this story with a grain of salt.  But with that said... what a beautiful thing to see before starting the weekend. I hope everyone can find a way to do something inspiring in their own lives.  If you'd like to learn more about Arthur Boorman or DDP Yoga, you can visit Diamond Dallas Page's website by clicking here.
View CBS News In
CBS News App Open
Chrome Safari Continue
Be the first to know
Get browser notifications for breaking news, live events, and exclusive reporting.