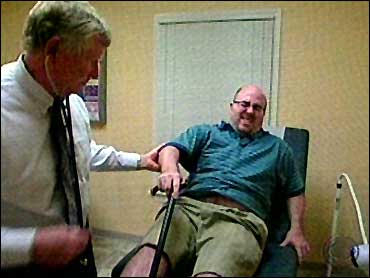 This is the first part of a CBS News investigation into Social Security disability benefits.


Each year, millions of people who are disabled from an accident or disease turn to the federal government for Social Security disability payments - a benefit that every worker who is declared disabled is eligible to receive. It's a 51-year-old government insurance program - a lifeline of sorts - that every worker pays for through that line-item on their pay stub, known as FICA.

But a two-month CBS News investigation reveals that safety net may not be there when you need it most.

"I always figured that I'd die in a fiery car wreck or something, never that I'd be disabled," 33-year-old Scott Watson told CBS News chief investigative correspondent Armen Keteyian.

Two years ago, a failed surgery left Watson with a fracture in his spinal cord. It turned his life upside down, leaving him unable to work in his job as a broadcast engineer.

"Everybody says, 'You gotta have a positive attitude,'" Watson said. "You know, and I say, 'Well, I am positive. I'm positive this is the end,' you know. I mean it's not going to get better."

Declared disabled by the state of Maryland, Watson was told he was "shoo-in" when he applied for federal disability last year, only to be turned down three months later on the grounds, according to federal guidelines, he wasn't disabled enough. Watson appealed, and was denied again.

Overall, two out of every three people who apply for federal disability benefits are rejected by a government agency that critics say is out of date, underfunded, and incapable of serving the exploding number of disabled Americans. Waiting times for a hearing in some cities are more than three years.

Linda Fullerton, an advocate for the disabled, told Keteyian: "I have people all the time writing to me, saying they are suicidal."

Fullerton's online support site is home to one horror story after another.

Reading from emails, she said: "Had to file bankruptcy to keep home. Losing home with four children."

A two-month CBS News investigation has found that over the last two years, at least 16,000 people fighting for disability benefits died while awaiting a decision.

People wait an average of 520 days for a hearing on their claims.

People like Jerry Rice, who calls an abandoned tool shed home. When we found Rice, who suffers from mental illness, he'd been waiting for three years for his day in court.

"So. Jerry, this is how it ends up for you?" Keteyian asked.

But he believes he deserves the disability?

"It's a mess from the time you apply - till the time you get a hearing," said attorney John Hogan, who has represented thousands of folks in Atlanta, the backlog capital of the nation.

"We're the furthest behind of any area of the country, it could take 2.5 years to get your hearing," Hogan said.

That's because there are some 24,000 cases waiting to be heard. And only about 15 local judges to handle them.

"We have a lot of room for improvement," said Social Security Commissioner Michael Astrue, who took over the federal disability program last year. He stepped up efforts to fix the system many call broken.

"So I think it's been broken the way a leg is broken," he said. "And it can heal. And it is healing."

Keteyian asked: "But what do you say to the people who have stood in that line, that three-year line?"

"I don't have a defense. I don't think it's a good thing. It don't think it should have been allowed to happen," Astrue said. "We're probably not gonna be able to drive back the backlog down at the arte that it went up. But we're sure as hell gonna try."

That's little consolation to the likes of Scott Watson, who has had to rely on his parents to simply survive.

"You pay into a system that you think is gonna help you in your time of need, and it doesn't even acknowledge that you even have a problem," Watson said.