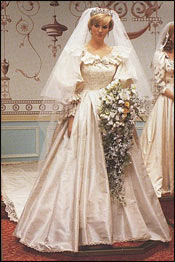 Princess Diana's spare wedding dress – a replica made in case the one she wore got damaged – is to be auctioned.

Diana tried on the ivory silk gown, an exact copy of the dress she wore, on the morning of her wedding, auctioneer Cooper Owen said Wednesday.

The only difference between the dresses is that the actual one she wore had Queen Mary's lace sewn on to the front, while the replica had a copy of the lace, the auction house said.

The dress is expected to fetch more than $90,000 at the Dec. 7 sale of celebrity memorabilia at the Proud Gallery Camden, in north London.

Millions of television viewers around the world watched Diana marry Prince Charles on July 29, 1981. The couple divorced in 1996.

The original gown is part of an exhibition about the princess at Althorp, her family's country home near Northampton, central England.

A replica of the wedding dress worn by the Duchess of York, which was also a standby, was also being auctioned and was expected to fetch around $10,000. A vest worn by James Dean in the movie "Giant" was expected to go for around $58,000.