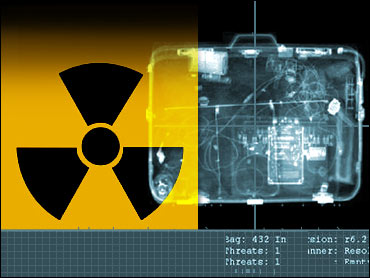 A "dirty bomb" is not to be confused with a nuclear explosion, but experts say such a device could release relatively small amounts of radiation over several city blocks and have its most devastating effect in the panic it probably would create.

For that reason, it has been called an ideal terrorist weapon.

A dirty bomb also is relatively easily to fashion. It can use a conventional explosive to disperse radioactive material.

Last month, the Nuclear Regulatory Commission disclosed that it receives an average of 300 reports a year of small amounts of radioactive materials missing from construction sites, hospitals and other users of these radioisotopes.

NRC officials said they have no evidence of anyone collecting this material to have enough for a dirty bomb. But critics say no one is sure of that.

The NRC has acknowledged that even a small amount of radioactive material, if properly milled into fine particles and dispersed by a conventional explosive, could spread radioactive particles over an area of several blocks.

If a dirty bomb were to be detonated, it could cause significant damage, and possible loss of life from the conventional explosion. But generally the impact of the radiation release would be isolated.

"A few closest to the explosion might inhale enough radioactive material to obtain internal radiation doses exceeding the (100 millirem) NRC annual limit for members of the public, but they would not be expected to experience any prompt or latent health effects as a result," NRC Chairman Richard Meserve said recently in a letter to Rep. Ed Markey, D-Mass., who had inquired about the use of stolen radioactive material to fashion such a bomb.

As opposed to a dirty bomb, a crude nuclear bomb, in which there is a nuclear chain reaction, could kill tens of thousands of people over a three-mile radius of the blast. Thousands more would suffer radiation poisoning from such an attack.

The simple use of radioactive material with conventional explosives could hamper rescue work, create a cleanup problem and cause fear and public panic, experts say.