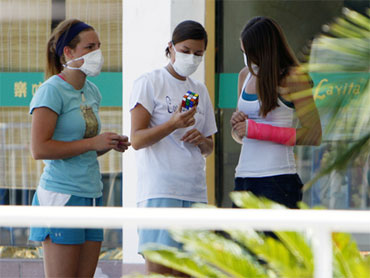 Two major health organizations say the H1N1 (swine flu) pandemic could effect a vast portion of the world's population in the coming years. In the U.S., the Centers for Disease Control and Prevention announced that the number of Americans stricken with H1N1 could reach 20 to 40 percent of the population over the next two years.

Meanwhile, the World Health Organization's flu chief says the global H1N1(swine flu) outbreak is still in its early stages and 2 billion infections over the course of the pandemic is "a reasonable ballpark to be looking at."

Keiji Fukuda, WHO's Assistant Director-General for Health Security and Environment, told The Associated Press on Friday that previous pandemics show even a few million cases could be "relatively early in the pandemic" and that given the size of the world's population, the new H1N1 virus is likely to spread for some time.

Fukuda says reports from Britain of a sharp spike in cases is consistent with WHO's expectations even though the Geneva-based agency has only received confirmed reports of some 130,000 infections worldwide.

The global health agency stopped asking governments to report new cases last week, saying the effort was too great now that the disease has become so widespread in some countries.

Health authorities in Britain say there were over 100,000 infections in England alone last week, while U.S. authorities estimate the United States has over 1 million swine flu cases. Those figures dwarf WHO's tally of 130,000 confirmed cases worldwide since the start of the outbreak last spring.

If the CDC projection is true, twice the number of people who usually get sick in a normal flu season will be afflicted by the swine flu. Officials said that estimate would drop if a planned vaccine campaign and other measures are successful.

Based on the new projections, the number of swine flu deaths in the U.S. over two years could range from 90,000 to several hundred thousand, if efforts to stem the flu failed. The CDC said the estimates are based on a 1957 flu pandemic.

Fukuda, the former chief of epidemiology at the CDC, also said there must be no doubt over the safety of swine flu vaccines before they are given to the public.

Health officials and drug makers are looking into ways of speeding up the production of the vaccine before the northern hemisphere enters its flu season in the fall.

"Everybody involved with the vaccine work, from manufacturers up to the regulatory agencies, are looking at what steps can be taken to make the process as streamlined as possible," Fukuda said. "One of the things which cannot be compromised is the safety of vaccines."