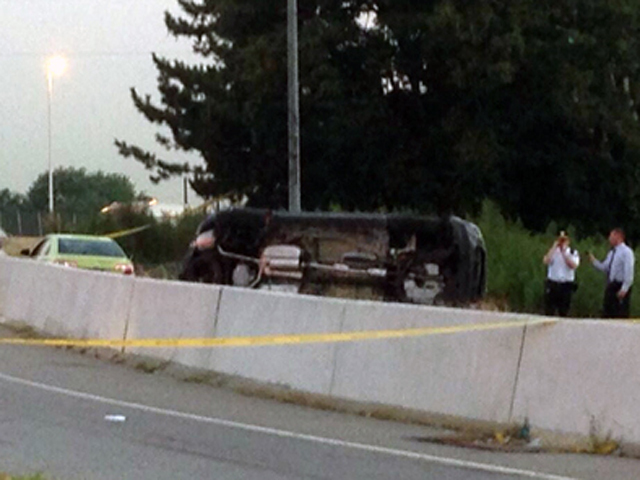 (CBS/AP) NEW YORK - The NYPD says a woman was stabbed to death after a vehicle she was in was rammed by a livery cab in an apparent domestic dispute, according to CBS New York.

It happened around 4 a.m. Wednesday on the Pelham Parkway in the Bronx, near the New England Thruway.

Police reportedly said 31-year-old Diones Espinal chased down his ex-girlfriend who was riding on the passenger seat of a Honda Pilot.

The car was being driven by a 28-year-old man referred to by authorities as a platonic friend.

Police reportedly said Espinal slammed his car into the SUV, causing the vehicle to hit a concrete barrier and overturn. The suspect allegedly then got out of his car with a knife and stabbed his ex-girlfriend in the neck and torso while she was still trapped in the wreckage. The victim was pronounced dead at the scene.

The driver of the SUV was not seriously hurt.

CBS New York reports Espinal was a driver for a car service company and was working at the time of the incident.

A company employee told the station Espinal and the victim had a history of problems and that they recently had a baby.

The unidentified victim allegedly had a restraining order against the Espinal.

Charges against the suspect are pending.