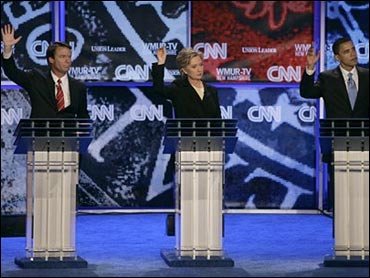 
So you didn't watch the Democrats debate on CNN last night?

Let me see; what did you miss?

Joe Biden spoke a lot louder than he usually does. That made him stand out from the crowd. For a while.

Barack Obama got off the best line of the night, addressing John Edwards and speaking about his conversion to being against the war. Obama said, "You're 4 1/2 years late."

As for substance, well, there is something deeply dissatisfying about the format. It's like eating at a buffet line for two hours and finding yourself still famished when it's all over. It's true of the Republicans, too.

Maybe all of this is just the appetizer, a means of preparation for the real meal — and perhaps by then we will have a better idea of what we want.