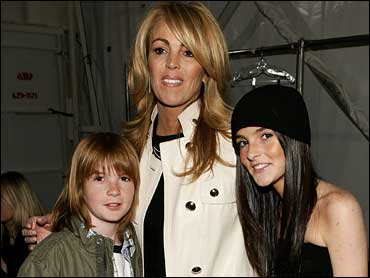 Dina Lohan, the mother and manager of actress Lindsay Lohan, is in talks to do a reality show with cable's E! channel tentatively called "Mom-ager," in which she'll try to turn Lindsay's younger siblings — Ali, 13, and Cody, 11 — into stars, the New York Post reports.

Dina has been trying for more than a year to get a TV job, the newspaper says. She has done two guest gigs as a TV reporter for "Entertainment Tonight."

Lindsay checked into Promises rehab center on Memorial day. A source tells the newspaper that she "may stay for more than a month."

Dina has taken heat in the media for being more of a friend to her daughter than a parent. One insider who talked to the Post balked at the idea of Dina getting her own reality show.

"Can you believe that? She totally messed up Lindsay by making her a 'star' and living vicariously through her — and now she's going to do the same to the other two? How the (bleep) can E! do this? Those kids should be in school having normal lives, the life that Lindsay didn't get to have."

Lindsay's little sister, Ali, has already had a taste of the entertainment business. She released a Christmas album at the end of last year. Ali said she had already learned a lot from her famous sibling in an interview with The ShowBuzz in December.

"Basically, just to keep your head up high and stay strong," she said. "Like, if you go on an audition and don't get something, you still try. You don't give up."